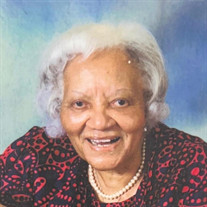 Alberta Spicer Sides Banks Kemp also known as Aunt Tootsie was born in Cape Girardeau, Mo. on August 26, 1925. She was the fifth oldest child and the third daughter of Helen and John Spicer’s eight children. She was given her nickname Tootsie by a family friend. The name came from a comic book character called Captain Tootsie. The captain was a superhero invented by Tootsie Roll Industries to advertise Tootsie Rolls and other products. The captain always had to eat a Tootsie Roll when he had an important job to do. It’s said Aunt Tootsie loved the candy and sharing them with others. She also felt that there was always a job to be done. She attended John S. Cobb School in Cape Girardeau graduating in 1944. Following graduation, she attended Milady’s School of Beauty Culture in St. Louis, Mo. She worked for Cape Girardeau Public Schools as a cook; she retired from Kmart Corporation in 1987. Alberta was a member of Holy Family Catholic Church until it closed in 1958 after which she became a member of St. Mary’s Cathedral. She was also a 4-H Leader, Girl Scout Leader and Cub Scout Den mother at St. Mary Cathedral School. She attended St. Mary until moving to Kansas City, Mo., in 1974. In Kansas City she was a member of Blessed Sacrament Catholic Church where she was secretary of the parish council. Alberta also was president of the PTA at St. Martin de Porres’ Catholic School in Kansas City. She returned to Cape and St. Mary’s in 1988. Alberta worked as a housekeeper at the church rectory until moving to Milwaukee, Wis., in 1993. While in Milwaukee she belonged to St. Catherine’s Catholic Church. Alberta’s interest in and love of education continued while in Milwaukee. She was a volunteer grandparent at Francis Starms Elementary School and Mother of Good Counsel Elementary School. Alberta returned to Cape via Naperville, Ill., in 2008. Upon her return, she socialized with new friends and old at the Hoover Center at Southeast Missouri State University. The center offered adult daycare until it closed in 2019. She also was a volunteer at Southeast Hospital and a member of the auxiliary. She faithfully folded the weekly church bulletins at St. Mary's. Alberta received the volunteer of the year award in 2018, marking 1000 volunteer hours and Stellar Seasonal Women award in 2019. In addition to being the family’s matriarch she was the author of the fabulous cookbook “Aunt Tootsie’s Best Family Recipes” and one of the founders of Holy Family Catholic Church. The church was founded by Alberta, her brother John Spicer, their friend Walter Lee and the Rev. Willis (Gus) Darling. The young people, who were receiving religious instruction from Rev. Darling, approached him with the idea for a Black Catholic Church. They wanted a church of their own. Her parents and her maternal grandmother, Nettie Hopper, the Seyer family and other community members helped establish and contributed to the construction of the church. Holy Family was dedicated as a mission of St. Vincent’s Church on Sunday October 6, 1940 in what was then called Smelterville. A two-room elementary school opened in the church basement about two years later. Holy Family was an important part of Cape’s Black community until it closed in 1958. Her long and productive life was recognized in 2015 when her 90th birthday, August 26th was proclaimed Alberta Banks-Kemp Day in Cape Girardeau by former mayor Harry Rediger. She loved her family immensely and stressed the importance of family, faith, education and hard work to everyone she encountered. Alberta left us on the evening of April 9, 2022 after sharing a few words with special nephew, John Sterling. Their moment was shared by her daughters Alice Mason and Gina Eanes; nieces Pam Jenkins and Donna (Sue Baby) Jenkins and friend Ashley Wheeler at the Lutheran Home. She was preceded in death by her parents Helen and John Spicer; sisters Inez Taylor, Evelyn (Dolly) Jenkins and Mary Spicer; brothers Leonard (Sam) Spicer, Edward Spicer and John Spicer, son Nathaniel Banks and granddaughter, Sharon Smith Meads, grandsons, Nathaniel Banks, Herbert Banks and James Smith. She is survived by her brother Robert Spicer Sr. and her children Carolyn Smith, Phyllis Sides, Gwendolyn St. Julian (Rick Lucas), Alice Mason, David Sides, Gina (Raullo) Eanes, Paul Banks, Estelena (Elbert) Cooksey and Joyce (Albert) Givens. She also leaves to mourn her passing 22 grandchildren, 26 great grandchildren, 8 great-great grandchildren, nieces, nephews, cousins and many other relatives and friends. We celebrate her life with a visitation arranged and handled by Crain Funeral Home, 829 N. West End Boulevard, Cape Girardeau, MO 63703 on be Thursday, April 21, 2022 from 5 to 7 p.m. followed by parish prayers at 7 p.m. at the funeral home. Alberta’s life celebration and Funeral Mass will be April 22, 2022 at 11 a.m. at The Cathedral of St. Mary of the Annunciation, 615 William St., Cape Girardeau, Mo. Her final resting place will be at St. Mary’s Cemetery, Perry Avenue, Cape Girardeau, Mo. Memorials will be to the Catholic Social Ministry food pantry as well as The United Negro College Fund and will be accepted at the funeral home.

Alberta Spicer Sides Banks Kemp also known as Aunt Tootsie was born in Cape Girardeau, Mo. on August 26, 1925. She was the fifth oldest child and the third daughter of Helen and John Spicer&#8217;s eight children. She was given her nickname... View Obituary & Service Information

The family of Alberta Spicer Sides Banks Kemp created this Life Tributes page to make it easy to share your memories.

Send flowers to the Kemp family.