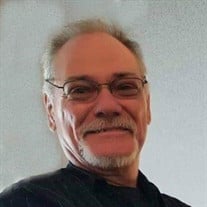 Allen Scott Wilke, age 58, of Cape Girardeau, Missouri, was gently lifted up to Heaven on Tuesday, January 25, 2022. He was born on September 12, 1963 to Leroy and Alberta (Biester) Wilke of Cape Girardeau, Missouri. Allen attended Trinity Lutheran School and Central High School. Allen grew up spending most of his time working at his father’s shop W&L Repair, where his love of cars and car repair began. He participated in several demolition derby events at Arena Park, with his favorite number, double zero, painted on his car. Sometimes he would be found fishing and camping at his favorite place in Tilsit, usually surrounded by his friends. He loved visiting his Grandma Alma and Uncle Gilbert while he was there. Allen was also a very skilled pool player and had previously played on the APA and Busch Leagues where he had the opportunity to make lifelong friends. He enjoyed RC Cars and computer games as well. He was a friend to those that knew him, and could be counted on to help a friend in need. Allen never pretended to be something that he wasn’t and with him, what you saw was what you got. Allen is survived by his four children, Jared (Amber)Wilke, Devon (Alex) Wilke, Brooke Wilke of Cape Girardeau, and Amber (David) Jackson of Jefferson City, Missouri; he was a loving grandfather to eight grandchildren, Savannah, Ashe, Kaedan, Jayden, Skylynn, Peyton, Mason, and Logan; two sisters, Paulette (Bob) Williams of Jackson, Missouri and Veronica Wilke of Cape Giradeau; brother, Michael (Janean)Wilke; and several nieces, nephews, cousins, aunts, uncles, and friends. He was preceded in death by his parents, and special family friend, Blake Wilke. A celebration of life will be planned at a later date. In lieu of flowers, the family request that memorials be made to assist with the cost of the funeral arrangements. There has been a Go Fund me account has been set up for donations.

The family of Allen Scott Wilke created this Life Tributes page to make it easy to share your memories.

Send flowers to the Wilke family.