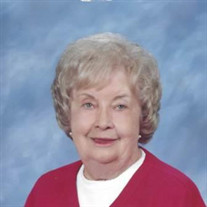 Alma (Farrar) Todd Bauernfeind, age 99 of Carbondale, passed away Tuesday, January 18, 2022. She was born June 15, 1922 to Alvin and Minnie (Puntman) Farrar in Longton, MO. On November 20, 1945 she married Everett Todd. He preceded her on June 17, 1981. She then married Harry Bauernfeind on December 11, 1982. He preceded her on March 3, 1989. Alma was a graduate of Grand Tower High School. She received her bachelor degree in Home Economics and her master’s degree in Educational Administration from Southern Illinois University. She taught school for one year at Valier High School. From 1947 to 1980 she taught, Home Economics, now known as Family and Consumer Science. at the Carbondale Community High School. She was a member of IEA; NEA and Illinois Vocational Home Economics Teachers Association, serving as treasurer for two years. She and her first husband, Everett belonged to Wally Payam Caravan Club in the 1970’s. They traveled forty states and three provinces of Canada during summers. Alma was member of First Methodist Church of Carbondale. She was also a member of Illinois Retired Teachers Association; Jackson County Retired Teachers Association, serving as a former treasurer; member of AARP and Jackson County Chapter. She volunteered at Carbondale Memorial Hospital for fifteen years; and a member of the hospital auxiliary. She was an active member of Preceptor Zeta Lambda of Beta Sigma Phi, serving many times as vice president or president. She enjoyed attending church; family get-togethers; reading; walking; rose gardening and playing with her pet Bichon Friese Bear. She also collected dolls, having over four hundred Shirley Temple; Madame Alexander; International and Celebrity Dolls. She won best of show and people’s choice awards with her Shirley Temple dolls at the 2006 charity event at John A. Logan College doll show. She is survived by her daughter, Patsy (Eugene) Beckett of Cambria; two brothers, Elmer (Mary) Conder of Chester and Donald (Donna) Conder of DuQuoin; a brother-in-law, Joe Claxton of Mt. Vernon; a grandson, Denny (Lori) Chapman of Weirsdale, FL; granddaughters, Laura (Bill) Abbott of Galatia, Tammy (Russell) Beckett and Erin Hale; a step-grandson, Richard Beckett; a great-granddaughter, Leah; a great-grandson, Lucas; many other loving grandchildren and great-grandchildren, their families; nieces; nephews; other relatives and a host of friends. She is preceded in death by a daughter, Vicki Asher; her parents; her step-father; brothers, Herman Conder and wife; Leslie (Catherine) Conder and Rollie (Shirley Conder; a sister-in-law, Nellie Claxton and beloved step-children and their families. Funeral Services for Alma Bauernfeind were private. Interment was private in Pleasant Grove Memorial Park. In lieu of flowers, memorials can be directed to the American Cancer Society and will be accepted at the funeral. Crain Pleasant Grove-Murdale Funeral Home is in charge of arrangements.

Alma (Farrar) Todd Bauernfeind, age 99 of Carbondale, passed away Tuesday, January 18, 2022. She was born June 15, 1922 to Alvin and Minnie (Puntman) Farrar in Longton, MO. On November 20, 1945 she married Everett Todd. He preceded her on... View Obituary & Service Information

The family of Alma Bauernfeind created this Life Tributes page to make it easy to share your memories.

Send flowers to the Bauernfeind family.