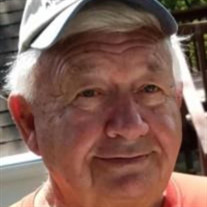 Anthony (Tony) McDaniel 1941-2021, Lake of Egypt—passed away October 31, 2021, surrounded by his family at SSM Health DePaul Hospital in St. Louis, MO, due to complications after surgery. He was born in Waverly, IL on February 21, 1941, to Dixie and Edward McDaniel. He was a 1959 graduate of Cahokia, IL High School. Later, he attended Belleville Barber College. In 1962 he married Doris Ann Minton of Tamms, IL. She survives. Tony barbered for 9 years in Carbondale, and later took computer classes at VTI at SIU. He worked a few years at both Blue Bell Packing Co. in DuQuoin, and City National Bank in Murphysboro. He finished out his last 20 years until his retirement in 1999, working in the Finance Dept. for the City of Carbondale. His only son, Jeffrey S. McDaniel, preceded him in death in 2017. Tony enjoyed more than 20 years of retirement. Hunting and Fishing were his passion. Years of camping also led to spending half his time in Bradenton, FL where the weather was warm and the fishing was good, and the other half at Lake of Egypt boating and fishing with his family. Survivors include his wife, Doris; daughter in law, Jana McDaniel; grandchildren, Meredith, Caleb, Mikayla and Mariah; and two great grandchildren, Brayden and Avory McDaniel. Cremation rites have been accorded. Crain Pleasant Grove-Murdale Funeral Home is in charge of arrangements.

The family of Anthony "Tony" Wynn McDaniel created this Life Tributes page to make it easy to share your memories.

Send flowers to the McDaniel family.