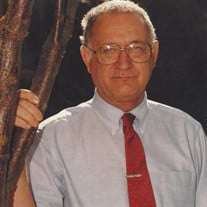 Arkel Kay Hartman, age 87, of Marion, passed away on Tuesday, July 20, 2021 at 10:55 a.m. at Sunshine Gardens in Marion. Mr. Hartman was born to the late Frank W. and Ardath L. (Lohrding) Hartman on July 8, 1934 in Pinckneyville. He graduated from Trico High School in Campbell Hill and Southern Illinois University at Carbondale with a B.A. in Mathematics. He married Elizabeth Ann Dattilo on October 24, 1965 in San Jose, California, and she preceded him in death on October 21, 1988. He then married Anna Dephane Griffith on December 31, 1989 in Equality and she survives him in Marion. Arkel was a member of Harvest Time Worship Center in Herrin, was an avid St. Louis Cardinals fan, and was deeply interested in family genealogy and Civil War History. He served in the United States Army for eleven years with duty in Korea, Indonesia, Ethiopia and Germany. Upon discharge, he worked as a nuclear engineer with the General Electric Company in San Jose, California for twenty-seven years. Survivors include his wife, Dephane Griffith-Hartman of Marion; his son, Christopher Hartman of Fernley, Nevada; a step-daughter, Lisa Hall of Paducah, Kentucky; two step-sons, Keith Griffith of Mt. Vernon and Kevin (Terina) Griffith of Equality; nine step-grandchildren, Cliff (Tiffani) Stone, Clint (Bethany) Stone, Rheannon (Keith) Boddie, Rick (Stephanie) Griffith, Chelsea Griffith (Theo), Mikaela Griffith, Amoura Griffith, Ashtyn (Shawn) Bingham and Taylor Griffith; ten step-great-grandchildren; his brother and sister-in-law, Robert (Erjuana) Hartman of Percy; his sister and brother-in-law, Dorothy (Bill) Lively of Percy; and several nieces, nephews, other relatives and friends. He was preceded in death by his parents; his first wife; and a sister, Francis Georgette Hartman. Funeral services will be held at Crain Funeral Home–Egyptian Chapel in Energy on Friday, July 23, 2021 at 3:00 p.m. with Reverend Todd Hawk officiating. Entombment will follow in Egyptian Memorial Gardens Mausoleum. Military rites will be conducted by the Honor Guard Ritual Team comprised of the Carterville American Legion Post 347, the Herrin American Legion Post 645, and Herrin V.F.W. Post 1567 with assistance from the United States Army. Visitation will be held at the funeral home on Friday from 2:00 p.m. until the hour of service. Crain Funeral Home–Egyptian Chapel in Energy has been entrusted with the arrangements. In lieu of flowers, the family requests memorial donations be made to Harvest Time Worship Center in Herrin. Envelopes will be available and accepted at the funeral home.

The family of Arkel K. Hartman created this Life Tributes page to make it easy to share your memories.

Arkel Kay Hartman, age 87, of Marion, passed away on Tuesday,...

Send flowers to the Hartman family.