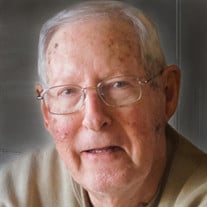 Billy Joe Schwegman, 86, passed away Tuesday, October 5, 2021 at his home in Carbondale. Born in Metropolis, Illinois, February 4, 1935, he called Carbondale home for over 70 years. Bill graduated from University High School, briefly attended S.I.U. Carbondale, then transferred to the University of Illinois (Urbana) where he earned a B.S. in Aeronautical Engineering. He married his high school sweetheart and next-door neighbor, Judith (Crandle) Schwegman in 1954, and the two enjoyed a marriage of nearly 66 years. A member of ROTC, Bill was on active duty for a brief period after graduation, then joined the Army Reserves, where he earned the rank of Captain. As a newly-minted aeronautical engineer, Bill worked for McDonnell-Douglas in St. Louis, Missouri, before returning to Carbondale. There he obtained his professional engineer’s license and became a civil engineer at the Illinois State Highway Department. During this time, Bill designed portions of the interstate highway system that runs through southern Illinois. In 1967 Bill became the first director of public works for the City of Carbondale. During his tenure, he began to systematize the repair of streets and to modernize the water treatment and sewage plants. His biggest contribution during those years was the construction of Cedar Lake as Carbondale’s source of drinking water. Not only does the lake ensure that the town has potable water for the foreseeable future, but it provides excellent fishing and recreation for the area. While at the City of Carbondale, Bill also served a six-month term as interim city manager. In 1973 Bill became head of the Carbondale office of Clark, Dietz, & Assoc., an engineering company headquartered in Champaign-Urbana, which planned the Mill Street railroad overpass and the Pleasant Hill railroad underpass in Carbondale. In 1979 he started his own consulting company, Southern Engineering, serving the civil engineering needs of many small towns in Southern Illinois. Upon his retirement, Bill and his wife Judy were active in organizing several University School Reunions, reuniting alumni from the days when classes were held in Old Main and the Allen Building up till the last class to graduate from its Pulliam Hall site in 1968. They enjoyed Learning in Retirement and supported the Varsity Theater and McCleod Summer Playhouse. Bill and Judy also enjoyed many travels after retiring, all over the U.S., the Caribbean, and Europe. They even took a safari in Tanzania. Bill won several blue ribbons for his photos, mainly of his travels, at the DuQuoin State Fair. Bill was a life-long member of the Benevolent and Protective Order of Elks. He was also made an honorary member of the Evergreen Garden Club, of which his wife Judy was president for three years, for his frequent assistance with transporting flower arrangements, gardening supplies, and even club members as they traveled to attend flower shows and to visit famous gardens. An avid “letter to the editor” writer in the Southern Illinoisan, Bill was honored with the Southern’s Golden Pen award. Bill was an elder and active member of the First Presbyterian Church of Carbondale. After his retirement, he donated many hours to repairs and improvements to the church building and grounds. He also organized a monthly restaurant fellowship gathering. Bill was preceded in death by his wife, Judith, his son, William Douglas, and his parents, Virgil and Margaret (Lay) Schwegman. He is survived by his daughter, Deborah Troester and her husband Joe Troester, of San Jose, California, and by his son Jeffrey and his wife Suzan (Stokes) Schwegman of Chesterfield, Missouri; as well as three grandchildren: Scott and Sara Schwegman of Chesterfield, and Christa Troester of Los Angeles, California. A memorial service will be hosted by the family and held at the First Presbyterian Church of Carbondale, at 310 South University Ave., on Tuesday, October 19, at 2 p.m. Friends may greet the family after the service. The church requests that masks be worn. In lieu of flowers, please send memorial gifts to the First Presbyterian Church, 310 South Illinois Ave., Carbondale, IL 62901 or to the American Heart Association. Please follow the Masks and Social Distancing guidelines. Following the service, there will be a time to greet the family outdoors on the green space. Simple beverages will be available. . The service will be available via ZOOM (see below) First Presbyterian Church of Carbondale is inviting you to a scheduled Zoom meeting. https://us02web.zoom.us/j/82484553329 Meeting ID: 824 8455 3329 Crain Pleasant Grove-Murdale Funeral Home is in charge of arrangements.

The family of Bill Schwegman created this Life Tributes page to make it easy to share your memories.

Send flowers to the Schwegman family.