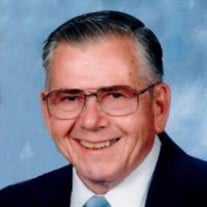 Burman Eddleman, 83, of Dongola, died at 7:54 PM, Friday, June 5, 2020 at his home. He was born October 15, 1936 in Dongola, son of Vivian and Elsie (King) Eddleman. Burman married Lucille Lingle on April 30, 1955. Burman was the community historian. He along with his wife, Lucille were the co-owners of the Dongola Tri-County Record from April 1, 1966 to 2003. He was a volunteer firefighter for the Dongola Fire Department. Burman loved fishing and water skiing. He had a passion for photography and not only took pictures for the newspaper but was also the family photographer. He was a member of the First Baptist Church of Dongola. Survivors include his daughters, Cheryl (Steven) Karraker of Metropolis and Debra (Jorge) Garcia of Bolingbrook, IL; son, Tony (Stacey) Eddleman of Hastings, NE; 8 grandchildren, Mendy (Bryan) McAlister of Dickson, TN, Beth Ann Karraker of Houston, TX, Tonia (Dave) Chaney of Hastings, NE, Chris (Carla) Eddleman of Pineville, LA, Bree (Ethan) Spillman of Dry Prong, LA, Mattie and Lyndie Eddleman of Hastings, NE, and David Garcia of Bolingbrook, IL; 13 great-grandchildren, Connor, Kendyl, Kinley and Carsen McAlister, Addison, Isabella and Reese Karraker, Brenton Eddleman, Alex and Serina Chaney, Benjamin, Bailey and Barrett Summerlin; other relatives and friends. He was preceded in death by his parents and his wife, Lucille. Visitation will be from 12:00 PM to 2:00 PM Monday, June 8, 2020 at Crain Funeral Home in Dongola. Groups of 10 people at a time will be allowed in to pay their respects. Burman’s children will be outside the funeral home to greet visitors. Private services for the family will be held later at the funeral home with Dr. Bryan McAlister officiating. Interment will be in the American Legion Cemetery in Dongola. Memorial contributions may be made to the First Baptist Church of Dongola and will be accepted at the funeral home.

The family of Burman Eddleman created this Life Tributes page to make it easy to share your memories.

Send flowers to the Eddleman family.