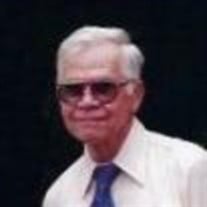 Calvin Lewis Gore, 90, of Swansea, IL, formerly of Olmsted, IL passed away on Friday, November 20, 2020 at Cedarhurst Assisted Living in Collinsville, IL. He was born on November 11, 1930 in Olmsted, Illinois to Don Carlos and Pearl Bertha (Basse) Gore. Calvin was a veteran of the United States Army (1953-1954) and served in Korea during the Korean War. He had a long career as an architect in Chicago Illinois, Memphis Tennessee, and St. Louis, Missouri. Calvin graduated from Mound City Community High School in Mound City IL in 1948. He attended the University of Illinois and graduated with a Degree in Fine Arts in 1952. After he was honorably discharged from the Army he returned to the University of Illinois to study architecture and received his degree in 1958. He is survived by 3 nephews, Kenneth Gore of Mexico, MO, Stanley Gore, and Philip Gore of Danvers, IL; 3 nieces, Beverly Stott of Cape Girardeau, MO, Janice Cappelletti of O’Fallon, IL and Kathy Gore of Springfield, IL; his special friend, Christine Ballew, and many other relatives and friends. Calvin was preceded in death by his parents and brothers, Carlos Notley Gore, Forrest William Gore, and Don Lowell Gore. Private burial will take place in Concord Cemetery near Olmsted. A memorial service is planned for a later date at which time a bronze plaque commemorating his Korean War service will be placed at his gravesite. Crain Funeral Home in Ullin is in charge of arrangements. In lieu of memorials during this pandemic, please social distance, wear a mask, and wash hands to keep our loved ones safe.

Calvin Lewis Gore, 90, of Swansea, IL, formerly of Olmsted, IL passed away on Friday, November 20, 2020 at Cedarhurst Assisted Living in Collinsville, IL. He was born on November 11, 1930 in Olmsted, Illinois to Don Carlos and Pearl Bertha... View Obituary & Service Information

The family of Calvin Lewis Gore created this Life Tributes page to make it easy to share your memories.

Send flowers to the Gore family.