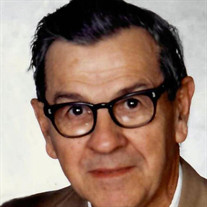 Carl E. Swoboda, Jr. was born on October 13, 1920—the second child to his parents—Carl Earl Swoboda and Anna Martha Bucher Swoboda. He spent most of his life in Cairo—educated at St. Joseph School and St. Joseph High School and then graduated from The David Rankin Jr. Mechanical Traders School in St. Louis, where he was educated in mechanical design and refrigeration. He served in World War II as a Technical Sergeant, 35th Combat Engineer Regiment and helped build the Alaska-Canada highway that is still used today. Everybody knows Mr. Carl as the Maytag Man in Cairo, where he operated his store on Commercial Avenue from the late 1940’s with the help of his sister Dorothy and brother-in-law, John Milford, and then alone with his wife, Elsie Mae, until he retired in 2012. Carl was an avid golfer and was awarded the Spirit of the Harvest-Connell Cup at the Egyptian Country Club in Mounds, IL. He was also a member of the Elks Club in Cairo and enjoyed the Thursday night dinners and fellowship. Also, Carl was a devout Catholic and sang vigorously in the choir at St. Patrick’s Church until it disbanded. Finally, he was an avid St. Louis Cardinals fan, which he enjoyed his whole life. Carl was married for 60 years to Elsie Mae Hudson Swoboda, until she died in 2009. They had one child, Carl Edward Swoboda, Jr., who resides in Germantown, TN. His grandchildren are Mary Jane Swoboda Matthies (Steven) of Memphis, Anthony Carl Swoboda (Sara) of Germantown, and Timothy Carl Swoboda (Christina) of Ladera Ranch, California. Carl was blessed with seven great grandchildren: Olivia and Ava Matthies; Violet, Charles, and Alexander Swoboda; and Savannah and John Carl Swoboda. Carl has been living in Germantown with his son since 2017 and got to enjoy all of these offspring in his final years. Carl died on Sunday, November 7, 2021. Graveside services will be at Green Lawn Memorial Gardens in Villa Ridge on Saturday, November 13, 2021 at 11:00 a.m. with Father Chris Mujule officiating. In lieu of flowers, the family requests with gratitude that memorials may be made in the form of masses to St. Patrick’s Church of Cairo. Mass envelopes will be available at the cemetery. Crain Funeral Home in Cairo has been entrusted with the arrangements.

Carl E. Swoboda, Jr. was born on October 13, 1920&#8212;the second child to his parents&#8212;Carl Earl Swoboda and Anna Martha Bucher Swoboda. He spent most of his life in Cairo&#8212;educated at St. Joseph School and St. Joseph High School... View Obituary & Service Information

The family of Carl E. Swoboda Jr. created this Life Tributes page to make it easy to share your memories.

Send flowers to the Swoboda family.