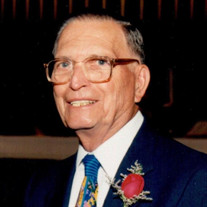 Charles Tripp Cochrane, age 101, of Cape Girardeau, formerly of Anna, IL and many other places, passed away at 1:20 PM on Saturday, October 17, 2020 at the Missouri Veteran’s Home in Cape Girardeau. He was born on October 5, 1919 in Jacksonville, Florida to James G. and Mabel (Wiggins) Cochrane. He married Lorna Stevens on June 3, 1951 in Los Angeles, California. She preceded him in death on June 28, 2008. Tripp, being a centenarian and member of the “Greatest Generation”, came into this world during the Spanish Flu and exited during the Coronavirus Pandemic of 2020. Most of his young life was spent in Ripley, NY until 1932 when his family moved to La Feria, TX. He enlisted in the Army in March of 1941 at Langley Field, VA. He was assigned to Chanute Field, IL to begin training as a meteorologist for the Army Air Corps. He served as a meteorologist for the remainder of World War II, earning an American Defense Ribbon and a Good Conduct Medal. He separated from the Army Air Corps at Rome Army Airfield, NY on October 21, 1945 as a Master Sergeant. Tripp worked for the National Oceanic and Atmospheric Administration (NOAA) as a meteorologist for over 30 years. He earned his moniker “Tripp” by moving dozens of times throughout his career and after. Among other places, he has lived in Wake Island, Canton Island, Fairbanks and Anchorage, Alaska, Salt Lake City, Utah, Las Vegas, Nevada, Los Angeles, California, Walla Walla and Anacortes, Washington, Phoenix and Prescott, Arizona, and San Diego, California. He earned his Bachelor of Science degree in Meteorology from the University of Utah in 1963. After having retired from NOAA in 1980, he and Lorna eventually moved to Illinois in 2004 to be near their son Dale. When Lorna passed away in 2008, he moved to Capetown Independent Living in Cape Girardeau. He moved into the Missouri Veteran’s Home at the age of 99. His positive attitude and engaging spirit won over many staff members. They would visit him when they needed a morale boost and he would frequently grace them with a song. Tripp was a huge sports fan, especially of baseball, and became a strong Cardinals supporter in his later years. He was also an avid gardener. His thumb was so green that he even “accidentally” planted a huge sycamore tree that grew from a twig he placed in the ground as a garden row marker. It is still growing behind his previous home at Capetown Independent Living. His friendliness, honesty and willingness to help people showed up in all facets of his life, from helping to manage a senior living facility in his retirement with his wife Lorna in Oceanside, CA, to his family being told by many people that “everybody just loves Tripp”. He is survived by his 4 sons, Chuck Cross of Sedona, AZ, James Cochrane of Carbondale, IL, Dale (Lana) Cochrane of Anna, IL, Mike (Kim) Cochrane of Cape Girardeau, MO and San Diego, CA; grandchildren Amy, Becky, Payton, Steven, Sean, Julia, and step-grandchildren Jason and Josh; many great-grandchildren; niece, Patty (Wayne) Harris of San Diego, CA; other relatives and friends. In addition to his wife and parents, he was preceded in death by his brother, Jack Cochrane. Cremation has been accorded. As a veteran of WWII, he has earned a full military honors service which will be held at a later date at Mound City National Cemetery in Mound City, Illinois. Memorial contributions can be made to the Alzheimer’s Association.

The family of Charles Tripp Cochrane created this Life Tributes page to make it easy to share your memories.

Send flowers to the Cochrane family.