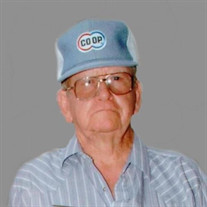 Charles E. Houston, age 82, of Jonesboro, passed away at 3:10am on Friday, January 1, 2021 at his home. He was born on January 10, 1938 in Anna to Claude and Alma (Casper) Houston. He married Linda Odum on August 24, 1983. She preceded him in death on October 1, 2016. Charles retired from Bunny Bread after many years as a truck driver. He was also a heavy equipment operator. He loved fishing, hunting, and trapping many different animals. Charles earned his 50 year pin with the Masons. Survivors include his daughter, Melodie (Brian) Penrod of Carterville; grandson, Colten (Alyssa) Penrod of Jonesboro; granddaughter, Michaela (Bobby) Sizemore of Dongola; great-grandchildren, Drake and Ella Penrod, Kimber and Piper Sizemore; sisters, Jo (Russell) Hill of Jonesboro, Rita Dillow of Dongola; brother, Larry Houston of Dongola; nephews, Gary and Patrick Dillow, originally from Dongola, Jason and Justin Hill of Jonesboro; special helper and caretaker, Kendra Lingle; many other relatives and friends. Besides his wife, he was preceded in death by his parents; son, Scott Randall Houston and grandson, Jordan Michael Houston. Cremation will be accorded and inurnment will take place at a later date at American Legion Cemetery. Memorial contributions may be made to the Masonic Lodge in Dongola. Crain Funeral Home Dongola has been entrusted with arrangements.

The family of Charles E. Houston created this Life Tributes page to make it easy to share your memories.

Send flowers to the Houston family.