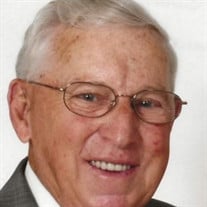 Charles W. Smith, 91 of Springfield passed away on Tuesday, October 26, 2021 in Herrin Hospital. He was born on May 16, 1930 in Lexington, IL, the son of Floyd C. Smith and Ora George. He married Norine A. Bennett on August 20, 1950. Surviving are two daughters, Debra (John) Voges of Goreville and Kathy (Victor) Lanzotti of Springfield; three grandchildren, Staci (Doug) Shafer, Craig (Laura) Smith and Benjamin Lanzotti; five great-grandchildren; three sisters, Evelyn Smith of DesPlaines, IL, Barbara Smith of Normal, IL, and Joan (Jim) Doll, Algonquin, IL; and one daughter-in-law, Kay Smith of Bloomington, IL. Preceding him in death are his parents; his wife, Norine A. Bennett; one son, Charles W. Smith, Jr. and one sister, Marilyn Wiese, Normal, IL. Chuck worked his entire career for Wareco Oil Co. and retired after 46 years as Vice President of Operations. He belonged to Westside Christian Church where he was an active member for many years. He enjoyed volunteer work at the Abraham Lincoln Presidential Library & Museum and the Lewis Memorial Christian Village. He loved traveling throughout the USA with Norine in their motorhome. They shared a special love and marriage of nearly 71 years. He enjoyed boating, fishing and time with family and friends. His playful bantering and wonderful sense of humor will be greatly missed. Cremation rites have been accorded. Inurnment will be in East Lawn Memorial Gardens in Bloomington, IL at a later date. Memorial contributions may be made to Westside Christian Church. Crain Funeral Home-Egyptian Chapel in Energy has been entrusted with the arrangements.

The family of Charles W Smith created this Life Tributes page to make it easy to share your memories.

Charles W. Smith, 91 of Springfield passed away on Tuesday, October...