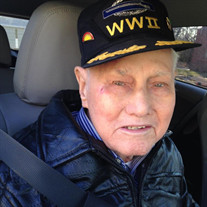 Claude Clifford Worthen, age 96, of Murphysboro, went to be with the Lord on Tuesday, February 22, 2022 at 4:20 p.m. at his home. He was born April 4, 1925 in Howardton, Illinois, the son of John Andrew and Lora (Avery) Worthen. An Army Veteran of World War II, Staff Sgt. Worthen courageously served his country in combat in the Philippine Campaign of the Asian Conflict. As first scout for his troop, he received two bronze stars for his heroism, along with several other medals. He was honorable discharged on January 17, 1946. Claude was united in marriage to Georgia Lee DeRossette on May 15, 1946. Together they shared thirty-six years until she passed away June 18, 1982. Later he married Martha Roberta Stearns on June 26, 1987. Together they have shared thirty-four years. Claude spent the majority of his working career in the construction and trucking industries. As he served faithfully in the United States Army, he also served faithfully in the Lord’s Army. For many years he has been a dedicated member of New Life Tabernacle in Murphysboro. He was preceded in death by his parents, John and Lora Worthen; his wife, Georgia Lee Worthen; one daughter, Wilma Lee Rogers; one son, Michael Eugene Worthen; one adopted granddaughter, Angela Bastien; three grandsons, Richard Andrew Worthen, Jacob Nathaniel Worthen, and Claude Michael Worthen; and one great-grandson, Jeffrey Chandler. He was also preceded in death by all his siblings, Pearl Story, John Worthen, Ella Suddeth, Ruth Hartline, Charles Worthen, Mary Schuetz, Clarence Worthen, Joe Worthen and Geneva Wiget. Survivors include his wife, Martha Roberta Worthen; one daughter, Claudia Tibbs; four sons and their spouses, Larry (Anne) Worthen, Gary (Lola) Worthen, Richard (Kathy) Worthen, and Paul (Susan) Worthen, all of Murphysboro; and one daughter-in-law, Janet Worthen of Herrin. Also surviving are twenty-five grandchildren; sixty-two great-grandchildren; twelve great-great-grandchildren; plus a host of other relatives and friends. Many precious memories created throughout his life will be greatly treasured by those he loved so dearly. Visitation will be held at New Life Tabernacle in Murphysboro on Sunday, February 27, 2022 from 3:00 p.m. until 6:00 p.m. and again on Monday, February 28, 2022 from 9:00 a.m. until 10:00 a.m. Funeral Services will be held at New Life Tabernacle in Murphysboro on Monday, February 28, 2022 at 10:00 a.m. with Reverend Larry Worthen officiating. Burial will follow in Murdale Gardens of Memory with graveside military rites by the American Legion Post 127 of Murphysboro and the United States Army. Crain Pleasant Grove-Murdale Funeral Home has been entrusted with the arrangements. In lieu of customary remembrances, the family requests with gratitude that memorial donations be made to the funeral home. Envelopes will be available at the church or at the funeral home.

Claude Clifford Worthen, age 96, of Murphysboro, went to be with the Lord on Tuesday, February 22, 2022 at 4:20 p.m. at his home. He was born April 4, 1925 in Howardton, Illinois, the son of John Andrew and Lora (Avery) Worthen. An Army Veteran... View Obituary & Service Information

The family of Claude C. Worthen created this Life Tributes page to make it easy to share your memories.

Claude Clifford Worthen, age 96, of Murphysboro, went to be with...

Send flowers to the Worthen family.