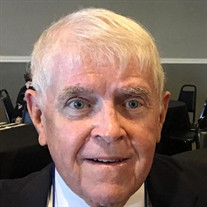 David Patrick Baril of Murphysboro, Illinois departed this world on November 12, 2021 surrounded by his family. Dave was born to Raymond Wood "Red" Baril and Dorothy (Dudenbostel) Baril on January 8, 1945. He was born in his family home in Campbell Hill, delivered in the same residence and by the same doctor who delivered his mother, Dorothy. His father, Red, mother, Dorothy, and one brother, Joel Baril, preceded him in death. Dave adored his family and is survived by his son Christian Baril and wife, Nellie, of Carbondale, daughter Rebecca French and husband, Rick, of Savannah, Georgia and Janet Baril, who he was happily married to from 1966 to 2016, raising their children, going on family vacations and running their business. He is also survived by his grandchildren, Sierra Anderson and her partner, Stephen Foshee, of Herrin, Zane Anderson, and his father, Eric, of Naperville, and Stirling and Sheldon Baril of Carbondale. He also leaves behind one great-granddaughter, Ilah Foshee. Dave is survived by his siblings Sandy Kopsky of Granite City, Illinois, Nancy Bridges of The Villages, Florida, Bonnye and Neill Clugston of Carbondale, and Steve and Noni Baril of Murphysboro, as well as many nieces and nephews and an innumerable amount of friends who loved him dearly. Dave was one of a kind, a true gem of a human being who always put others before himself. He grew up always trying to make a buck and helping support himself and his family, recycling soda bottles and delivering early morning newspapers in Pawnee, Illinois. Dave worked every job he could find while going to school, from waiting tables at The Holiday Inn in Springfield, Illinois to working at a gas station in Sturtevant, Wisconsin. Dave owned and operated Shell Gas Station in Murphysboro from 1966 to 1979 and later, Baril Auto Service in Murphysboro from 1980 until his retirement in 2000. Dave was an entrepreneur from birth and was a successful businessman in Murphysboro where he taught more than a handful of 16 year old boys how to sweep a floor and succeed in customer service so they could later start their own businesses. His humor and wit along with his keen sense of business and ability to make his customers happy was a gift that he was born with and he was a wonder to observe. Dave would find interesting ways to solve any problem, from helping each customer get on the road quicker to renaming employees if he had two with the same name. He thoroughly enjoyed people and managing them in their careers at the auto shop. And he was better at it than most. After retiring, Dave lived in Ava, Illinois where he raised and loved several wolves from puppies. He even took one to the auto shop with him daily, keeping him in a bed under his desk bottle feeding him every hour. Dave enjoyed driving his M151 military Jeep in local parades and taking it to various events throughout southern Illinois where it was a conversation starter with many veterans and Jeep enthusiasts over the years. During the time his children were young, Dave enjoyed taking long RV trips with his family and friends traveling to Gulf Shores and several western states and dubbed the vacations "land odysseys." Dave embodied the term, "Never met a stranger." Quick with a joke and always enjoying his one-liners, Dave could enter a room, a business, a hospital or any home and bring a smile to everyone's face. He adored his children, grandchildren and great-granddaughter and would do anything to see them succeed and flourish, never wanting for anything. Dave had a love for music, especially Ray Charles and anything Willie Nelson ever sang. He had tunes playing in his car on every drive and loved watching concerts from his favorite performers on YouTube, singing along and enjoying the show. King of the catchphrase, to know Dave was to know his witticisms. That's smart money, pretty good for an old guy, another good idea, he was beautifully predictable with his well-timed sayings. He loved his daily routine, making his stops and running his errands, talking to anyone he could to brighten their day. Dave valued a sharp appearance in those he encountered and always made everyone feel special and appreciated when complimenting a good looking suit or a new dress. He would show up with flowers, cannoli or a loaf of Amish bread just to make his friends and family feel loved and special. One of his famous running jokes was that he would have a raffle for a new truck at his funeral to make sure people showed up. In lieu of flowers, Dave asked that each and every person he knew spend time with a day with their family or for donations to be made to the following: Wolf Park 4004 East 800 North Battle Ground, IN 47920 Cremation will be accorded. Services will be private. Inurnment will take place in Murdale Gardens of Memory. Crain Pleasant Grove-Murdale Funeral Home has been entrusted with the arrangements. To view the obituary or to leave an online condolence for the family visit www.crainsonline.com.

David Patrick Baril of Murphysboro, Illinois departed this world on November 12, 2021 surrounded by his family. Dave was born to Raymond Wood "Red" Baril and Dorothy (Dudenbostel) Baril on January 8, 1945. He was born in his family home in... View Obituary & Service Information

The family of David Patrick Baril created this Life Tributes page to make it easy to share your memories.

Send flowers to the Baril family.