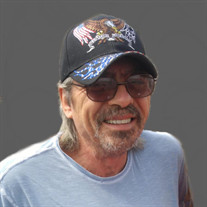 David D. Henderson, 62, of Olive Branch, passed away suddenly on Monday, March 15, 2021. He was born on November 4, 1958 in Cairo to Martie and Annie (Bledsoe) Henderson. On January 27, 2017, he became the happy husband of Ivy Pate of Olive Branch. David proudly served in the United States Army for 11 years as an E-5 Sergeant. After serving honorably, David translated his love for the outdoors into a farming career in Alexander County, and worked for Golden Cat Mine in Olmsted. David’s sense of adventure made him a robust character with many interests, including fishing, golfing, outdoor photography and kayaking. During his down time, you could often find him watching Gunsmoke, or admiring the paintings of Bob Ross. David D. Henderson loved his friends and family fiercely, and he will be sorely missed. Survivors include his wife, Ivy (Pate) Henderson; daughters, Beth (Steve) Taylor, Sarah (Mickey) Froman, and Janie Riggs; son, Jered Turner; brothers, Wayne Henderson, Wally Henderson, Steve Henderson; sister, Cathy Hoban; grandchildren, Kyle Taylor, Drew Taylor, Ethan Pyles, Emma Pyles, Clayton Froman, Abby Froman and many loving nieces and nephews. He was preceded in death by parents Martie and Annie Henderson; sisters, Charlotte and Gloria; brothers, Alfred, Bill and Hollis; and uncle Marlin. Visitation will be held from 11am to 1:00pm on Saturday, March 20, 2021 at Crain Funeral Home in Tamms. Funeral services will be at 1:00pm at Crain Funeral Home with Reverend Larry Buckles officiating. Interment with full military honors will follow in Mt. Zion Cemetery. Memorial contributions may be made to Crain Funeral Home and will be accepted at funeral home. Crain Funeral Home in Tamms is assisting the family with the arrangements.

The family of David D Henderson created this Life Tributes page to make it easy to share your memories.

Send flowers to the Henderson family.