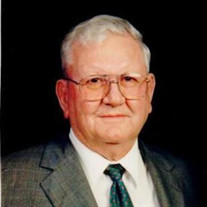 Donald Dwaine Carson, 91 ¾, died at 1:29pm, Friday, May 14, 2021 at Heartland Regional Medical Center in Marion after a short illness. Donald was born August 12, 1929 in Humeston, Iowa to Ward and Dorothy Carson. He married Patty Ann Hawk and they enjoyed 60 plus years together. She preceded him in death on January 19, 2017. Donald was, from a very early age, an extremely hard worker who provided for his family and sister, Marge from as early as one could. He did a number of odd jobs before entering the Army in 1951. He was honorably discharged in 1953 after spending his time in Germany. He then began a career in highway construction, building the 1st section of interstate highway in North America, in St. Charles, MO. His job required him to move frequently. He purchased a mobile home and with his wife, Patty, and children, he moved 13 times in 18 years before eventually landing his dream job with E. T. Simonds Construction Company. He was able to purchase his first permanent house and spent the rest of his career, 1968-1991 with his new employer. He loved the Simonds family very much. His son, Kyle began his career with E.T. Simonds at the age of 18 in 1983 to present, which means there has been a Carson with them for almost 60 years and counting. In his spare time he loved hunting, fishing, gardening and spent time in his garage/workshop, building and fixing anything he put his mind to. His survivors include his devoted son, Kyle Carson and his wife, Kirstin of Herrin, who had the pleasure of helping Don and Pat through their last years; sister, Marge (Dwayne) Stewart of Chariton, IA; granddaughter, Candice (Kevin) Dornan and great-grandson, Cooper of Yukon, OK; granddaughter, Jessica Epps and grandson, Garrett Epps of Herrin; brother-in-law, Jimmy Hawk of Iowa; special friend, Roger (Debbie) Kerley, who came and visited Don regularly. He also brought Don’s favorite peanut brittle and a birthday cake on Don’s special day these last few years! Don is also survived by many special nieces and nephews on both sides. He was preceded in death by his wife, Patty Ann Carson; son, Mike Carson; an infant daughter, Susan. A memorial service will be held Thursday, May 20, 2021 at 5:00PM at Crain Funeral Home Egyptian Chapel in Energy with Davy Nelson officiating. Military Rites will be conducted by the Honor Guard Ritual Team comprised of the Carterville American Legion Post 347, the Herrin American Legion Post 645, and Herrin V.F.W. Post 1567 with assistance from the United States Army. Visitation will be from 4:00PM until the start of the service at the funeral home. Private inurnment will take place at a later date at Egyptian Memorial Gardens Mausoleum. Crain Funeral Home-Egyptian Chapel in Energy has been entrusted with the arrangements.

The family of Donald Dwaine Carson created this Life Tributes page to make it easy to share your memories.

Send flowers to the Carson family.