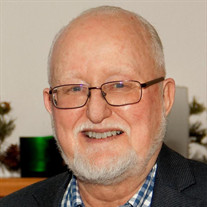 Donald Alan “Don” Gulbrandsen, age 80, of Carbondale, Illinois, passed away suddenly on February 13, 2021, at Memorial Hospital of Carbondale. He was born on February 11, 1941, in Rockford, Illinois, to Yul and Pearl (Butler) Gulbrandsen. He married Maureene Schafer on August 4, 1962. She survives him; they were married for nearly 58 years. Don was a graduate of Rockford East High School and Rockford College and later in life earned a Master of Business Administration degree from Lewis University. Don enjoyed a successful career as a financial executive, which also offered him an opportunity to travel extensively around the U.S., but also throughout Europe and to South America. He worked for many years with Sundstrand, enjoying assignments in Illinois, Colorado, England and Iowa and ultimately serving as a division Chief Executive Officer. He also was an officer with Blue Cross Blue Shield of Illinois, working in both Chicago and Marion. Later in his career he worked as a business consultant in southern Illinois. Don was proud of his Norwegian Lutheran heritage and church activities were always important in his life. He was a longtime and very active member of Epiphany Lutheran Church in Carbondale and served in a variety of volunteer and leadership roles including council president. He also volunteered with Meals on Wheels and was a member of the Sons of Norway Shawnee Skogen 689 Lodge. Don was a devoted husband and father, spending much of his free time enjoying activities with his family and friends. His children remember cross-country family vacations, sporting events, camping and hiking in the mountains, daily walks with his beloved dogs and many backyard cookouts and dinners. Survivors include son Don (Tari) Gulbrandsen of Indianapolis, Indiana; daughter Dana (Tracey) Rice of Wisconsin Rapids, Wisconsin; son Robert (Lauren) Gulbrandsen of Carbondale; and daughter Sara (Andrew) Gulbrandsen of St. Louis, Missouri, as well as by grandchildren Kendal (Katie) Gulbrandsen; Molly Rice; Owen Rice; Connor Gulbrandsen; and Ella Gulbrandsen. He is also survived by brother David (Debora) Gulbrandsen of Pecatonica, Illinois, brother-in-law Mike (Jeff) Schafer, nephew Erik (Corey) Gulbrandsen and niece Anna (Tucker) Blaser. Don will also be missed by his many friends, especially his fellow members of Epiphany Lutheran Church. A private service for the immediate family will be held at Crain Pleasant Grove-Murdale Funeral Home on Tuesday, February 16, 2021, at 2:00 p.m. The service will be available for viewing through a Zoom livestream. The family is planning a celebration of Don’s life for his family and friends in late summer 2021. Memorial contributions honoring Don should be directed to Epiphany Lutheran Church. Private inurnment will take place at a later date in Pleasant Grove Memorial Park. .

The family of Donald Alan “Don” Gulbrandsen created this Life Tributes page to make it easy to share your memories.

Send flowers to the Gulbrandsen family.