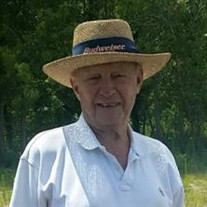 Donald E. Koch, age 88, of Cairo passed away at 10:02 AM on Thursday, June 4, 2020, at the Illinois Veteran’s Home in Anna. Donald was born July 26, 1931 in Cairo, the son of George and Verle (Looney) Koch. He married Hilda Baxter-Ivey on June 11, 1955. She preceded him in death on May 6, 2010. Donald proudly served our country in the US Air Force. He owned and operated Koch Shell in Cairo for many years. Donald held many memberships which included Knights of Columbus, Elks, American Legion and the Masons. He was an avid golfer and member of Egyptian Country Club. He was of the Catholic faith and member of St. Patricks in Cairo. He is survived by his daughters, Karen (Troy) Jones of Thebes, Lisa Koch of Paducah, Ky, Donna Mattera (John Oltman) of Springfield, Il, Lori (Jerry) Bennett of Thebes, and a son, Timothy (Tiffany) Koch of Olive Branch; grandchildren, Colin Pagano, Abbi Pagano, Hali Mattera, Nicholas Jones, Amanda Bennett, Kathryn Bennett, Allie Koch, Kyleigh Koch. He was preceded in death by his parents, and an infant son, Donald E. Koch Jr. Private graveside services will be held at Calvary Cemetery in Villa Ridge. Memorial contributions may be made to Illinois Veteran’s Home in Anna and will be accepted at the funeral home.

The family of Donald E. Koch created this Life Tributes page to make it easy to share your memories.

Send flowers to the Koch family.