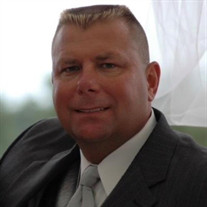 Dr. Clay Thomas Brewer, 57, of Murphysboro, IL, received the ultimate call home to be with the Lord and Savior on the dawn of Saturday, February 19, 2022. After a sequestered battle with cancer spanning over several courageous years, Clay passed away peacefully in his sleep surrounded by his beloved wife, Zeppelyn and his best buddy, his son Braydon. A highly respected life-long educator, Clay recently retired as Vice President of Administration at John A Logan College in Carterville, IL. He was a prominent figure in regional athletics, most notably being inducted into the Illinois ASA Fastpitch Hall of Fame in 2021. Clay was born August 29, 1964 in Carbondale, IL to Don and Wilma Jean (Turnage) Brewer. He was a graduate of Murphysboro High School, and was forever a Red Devil, bleeding crimson and corn. Upon graduation he attended John A Logan College where he played baseball and basketball. The next stop in his athletic career was as the starting catcher for the famous coach, Itchy Jones of the Southern Illinois Salukis Baseball Team. Clay graduated from Southern Illinois University with a Bachelor’s of Science in Education in 1985. He then went on to receive his Master’s in Education from SIU and his Doctorate in Education from Oakland University. His professional journey in education began at the Jackson-Perry County Regional Office of Education in the Truancy Alternative Education Program. Clay led with the belief that an organization's most valuable asset is its people and that relationships are the key to success. His next career move was to John A Logan College where, during his 20-year tenure, he served in a variety of positions, including Executive Director of the Human Resource Division. Clay credited any success he received in this assignment to his good friend and mentor, the late John Huffman, JALC Attorney. Clay demonstrated leadership through faith, and mentored many over the course of decades. Prior to retiring, Clay was honored to serve JALC as Vice President of Administration. Alongside professional successes, Clay continued to have many victories on the field both as a coach and as a player. He served as an assistant football and basketball coach for the Carbondale Terriers before eventually becoming the Head Football Coach at CCHS. Fast-Pitch softball was another sport in which Clay excelled; being a proud member of two IL State Championship Teams: Carbondale Italian Village and the Pinckneyville Celtics. His final season was with the renowned Decatur Pride, a team that won the Men’s Major Fast-Pitch National Championship, solidifying a Hall of Fame career. Above all, the accolades garnered in sports nor the recognition Clay earned from his professional achievements could ever measure up to the man Clay was on a personal level. He was a loving husband, father, son, brother, friend and most importantly, he was a man of Faith. Clay married Zeppelyn on September 23, 2006 and they spent 16 wonderful years together filled with love, adventure and laughter. Together their degree of happiness reached a new level on November 12, 2015 when Braydon Thomas Brewer the First was born. Clay was a very deserving father and quickly became Braydon’s superhero. They were best buddies and shared the love of the outdoors. They would often take hikes, Jeep and side by side rides and scout deer together. As a family they enjoyed traveling, taking Braydon on new adventures and listening to rock and roll. Clays legacy as a great father may be one of the first things that people close to him will mention when they remember him as he left an imprint on Braydon filled with unconditional love. Clay also shared a close bond with his father-Don a man that Clay respected as much as anyone. When Clay wasn’t spending time with his family, you would often find him in his “man cave” with his friends including several members of the class of 1982 reminiscing about Murphy Football. Clay also enjoyed collecting guns and wouldn’t turn the channel away from a good ole’ western or Andy Griffith. He was a member of First Baptist Church in Murphysboro, and enjoyed sharing scriptures with his mother and sister whom he shared a special bond with. Clay had an infectious spirit and an endearing smile that could light up a room. As much as he will be missed by the many who knew him, he will be remembered by the extraordinary person that he was. Survivors include his wife, Zeppelyn, son, Braydon, Mother and Father, Wilma Jean and Don Brewer, Sister and Brother-In-Law, Donna Jean and Dwayne Sanders, Mother and Father-In-Law, Cecilia and Rusty Dunbar, Brother-In-Law, Cody Dunbar, wife, Jennie and daughter Henley, Uncles and Aunts, Bob and Betsy Brewer, La Donna and Darrell Eastwood as well as Mary Lou Rednour and many cousins, nephews and nieces. He was preceded in death by his maternal grandparents, W.R. Roy Turnage and Beulah (Hagler) Turnage, paternal grandparents, Louis and Merline (Baker) Brewer and uncles, Bob Turnage and Roy Rednour. There will be a church service honoring Clay Brewer on Saturday, February 26, 2022 at 2:00 p.m. at First Baptist Church in Murphysboro, IL with Rev. Kent Eaton and Dr. Glenn Poshard officiating. The burial will be private. Following the church service, there will be a Celebration of Life at Jackson County Country Club from 5:00 p.m. to 8:00 p.m. in lieu of a visitation. In lieu of customary remembrances, the family requests with gratitude that memorial contributions be made to the Clay T. Brewer Athletic Scholarship. Checks may be made payable to Murphysboro High School. Please indicate Clay T. Brewer Athletic Scholarship in the memo line. Envelopes will be available at the church, during the celebration of life, or at the funeral home. Crain Funeral Home of Murphysboro has been entrusted with the arrangements.

Dr. Clay Thomas Brewer, 57, of Murphysboro, IL, received the ultimate call home to be with the Lord and Savior on the dawn of Saturday, February 19, 2022. After a sequestered battle with cancer spanning over several courageous years, Clay passed... View Obituary & Service Information

The family of Dr. Clay T. Brewer created this Life Tributes page to make it easy to share your memories.

Send flowers to the Brewer family.