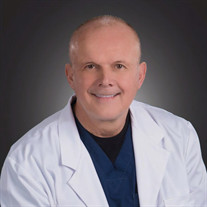 It is with great sorrow that the family of Dr. Witold A. “Witek” Szyfer announces his passing on February 7th, 2022. He will be remembered for his unyielding devotion to his patients, colleagues, medical community, and most especially, his adoring family. Dr. Szyfer lived his life with the courage and accomplishment that could fill many lifetimes. He was a generous, forgiving, and wise father, son, friend, and healer. He was born October 5th, 1954 and grew up in northern Poland. His passion for medicine began at the Medical Academy of Gdansk, Poland, where he earned his medical and doctorate degrees at the top of his class. After attaining his education at an unprecedented pace, he was honored by the Academy in the most prestigious role as both Physician and Professor. Dr. Szyfer’s dedication to medicine crossed continents when he immigrated to the US in the early 1990’s. He treasured his role as a physician for over 42 years and faithfully served the Southern Illinois community with his healing hands and undeniably witty sense of humor for the last 20 years. His profound brilliance in medicine allowed him to direct, publish, and teach in his field. Witek healed many thousands of lives and was not only a physician, but a companion to his patients. He would tell you that laughter is still a good medicine. From white water rafting to skiing double black diamonds, he was always up for an adventure. He was an avid athlete and incredible soccer player and unwilling to let time slow him down. He was a world traveler speaking seven languages and spanning many continents, and shared the privilege of a broader perspective with his daughters whom joined him on many of his trips at the expense of hysterical laughter from listening to his impeccable jokes. He loved the outdoors and had an affliction for animals. He loved spending time with his grandkids to whom he could rarely say “no”. He was Dr. Szyfer, Witek, Tata as known by his daughters; the man, the myth, the legend. He is survived by his loving daughters Ania Szyfer, Maggey Szyfer, and Julia (Szyfer) Szymczak, only granddaughter Eden, and grandsons Janek and Aleksander whom brought him much pride. He is preceded in death by his mother Dominika Klawsiuc. A memorial mass in his honor will be held at St. Joseph Catholic Church in Marion on Wednesday, February 16, 2022 at 6:00 p.m. A time of visitation will be held from 5:00 p.m. until the hour of service at the church. Arrangements have been entrusted to Crain Funeral Home-Egyptian Chapel in Energy. The family requests friends also visit dropevent.com/DRWITOLDSZYFER or email [email protected] to share fond memories and photographs to be used in his memorial.

It is with great sorrow that the family of Dr. Witold A. &#8220;Witek&#8221; Szyfer announces his passing on February 7th, 2022. He will be remembered for his unyielding devotion to his patients, colleagues, medical community, and most especially,... View Obituary & Service Information

The family of Dr. Witold A. "Witek" Szyfer, MD, PhD created this Life Tributes page to make it easy to share your memories.

It is with great sorrow that the family of Dr. Witold A. “Witek”...