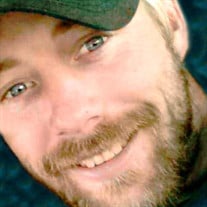 Dylan Riley Winslow, 34 of Marion, passed away Friday, September 18, 2020 at his home. He was born on April 25, 1986 in Conroe, TX to Brad R. and Karla E. (Crews) Winslow. Dylan graduated from Vienna High School in 2004 and went on to attend WYO Tech. He was an avid outdoorsman who loved to go camping, boating and hunting. He was a construction worker and a mechanic, very artistic and was a very good builder of furniture as well as building many pole barns. He also loved to go 4wheeling and had a passion for rock climbing and repelling and fishing. He loved the annual camp out on Labor Day weekend with his family but his 1st love was his children. Dylan was always helping.. anyone in need, no matter if it was a stranger stranded on the side of the road or off in a ditch or a 4wheeler in the back 40 at campout. Always turning a wrench on his or someone’s vehicle or motor. Dylan is survived by his mother, Karla Crews of Carbondale, his father, Brad R. (Diane) Winslow of Creal Springs and one sister Addison Winslow of Carbondale. His two sons, Jared Riley Ramage and Keagan Levi Winslow both of Marion; one daughter, Karlee Lyn Winslow also of Marion; his partner Kelly Jo Ford, her son, Jace Ford and daughter Kateyia Ford of Marion. Maternal grandmother, Emma Lou Crews of Carbondale and Paternal Grandmother, Bettie Lou Winslow of Dallas, TX. One niece, Emily Bundren of Carbondale, two nephews, Henry Bruns and Louis Bruns also of Carbondale; three aunts Kristy Sullivan of Carbondale, Donna Tomasi of Dallas, TX and Jo Ellen Roodhouse of Lake Norman, NC and one uncle, Alan (Jayne) Crews of Glen Carbon, IL; cousins, Sarah, Denver, Hannah, Patrick, Taylor, Riley, Rebecca, Weston and Benjamin. He is preceded in death by his grandfathers, Karlyn Crews and Russell Winslow. Funeral Services for Dylan Riley Winslow will be Monday September 21, at 7:00 PM at Crain Pleasant Grove-Murdale Funeral Home Visitation for Dylan will be Monday September 21, from 5-7:00 pm at the funeral home. Groups of 50 people at a time will be allowed in to pay their respects. Those attending the visitation and funeral service are requested to observe customarily accepted social distancing procedures. All attendees are reminded that, in accordance with recently announced State of Illinois guidelines, masks or face covering are required in public spaces. Memorial contributions can be made to Centerstone Marion Main St Campus, 1307 West Main Marion, IL 62959 and will be accepted at the funeral home. Inurnment will be private at a later date in Pleasant Grove Memorial park.

Dylan Riley Winslow, 34 of Marion, passed away Friday, September 18, 2020 at his home. He was born on April 25, 1986 in Conroe, TX to Brad R. and Karla E. (Crews) Winslow. Dylan graduated from Vienna High School in 2004 and went on to attend... View Obituary & Service Information

The family of Dylan Riley Winslow created this Life Tributes page to make it easy to share your memories.

Send flowers to the Winslow family.