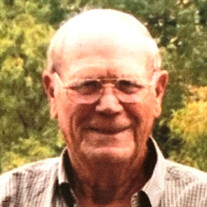 Edward Eugene Owens of Mounds, passed away peacefully at 12:55 PM, May 23, 2020 at Southeast Missouri Hospital. He was born August 29, 1933 in Malden, MO to A.E. and Pauline (Qualls) Owens. He married Freda Jo Showmaker June 9, 1951, who survives. Edward worked the farms he loved in Mississippi and Pulaski Counties for 64 years, retiring due to health concerns. He also enjoyed hunting and fishing. From 1988 to 1996 he was owner and operator of Owens and Collins Seed and Fertilizer Company. Besides his wife he is survived by his 4 children, Edward Owens Jr., Benny Owens, Michael Owens and Jane Bridges; 6 grandchildren, Edward Owens III (Butch), J.B. Owens, Alicia Brent, Jennifer Owens, Hunter Puryear-Owens and Michael Owens; 5 great granddaughters, Mollie and Charlotte Owens, Mae and Jane Brent and Mi’Karia Owens. He was preceded in death by his parents; 2 brothers, Bill and Dallas Owens; 1 sister, Phyllis Bright. There are no services planned at this time. A memorial service along with inurnment at Dogwood Cemetery in Mississippi County, MO will take place at a later date. In lieu of flowers, memorial contributions may be made to St. Jude Children’s Research Hospital, 262 Danny Thomas Place, Memphis, TN 38105.

The family of Edward Eugene Owens created this Life Tributes page to make it easy to share your memories.

Edward Eugene Owens of Mounds, passed away peacefully at 12:55...

Send flowers to the Owens family.