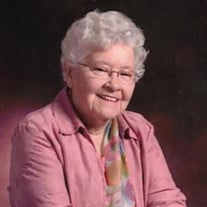 Emma Lutes Smith, 100, died at 4:05 am on July 5, 2021 at The Glenwood Assisted Living Center in Effingham. She is survived by two sons, Charlie Smith of Nashville TN, and John (Susan) Smith of Carbondale; two daughters, Kaye (Terry) Kimpling and Deb (Gary) Gregory both of Effingham; four grandchildren; eight great grandchildren, two great-great grandchildren; and brother Carl Lutes of Carbondale. In addition to her parents and husband of 57 years, she was preceded in death by her son David Smith, one sister Laura Hicks, two brothers Charles and James Lutes, and daughter-in-law Kathy Smith. Emma, the oldest of five children, was born in Christopher, IL on Jan. 28, 1921 to Charles and Bessie Duckworth Lutes. Emma graduated from Christopher High School in 1939, attended Southern Illinois University, received her teaching credentials in 1941, after which she taught grade school, led Sunday School classes, and started or assisted in many vacation Bible school sessions. She married Rev. Walter A. Smith on Aug. 3, 1941 in Makanda. Walter preceded her in death in 1998. They lived and served Methodist churches in Makanda, northern Illinois, Vienna, Equality, Olney, Flora, Lawrenceville, Fairfield, Mt. Vernon, Lebanon, Albion, and Anna, IL, before retiring in Carbondale. They spent many winters in Avon Park, Florida after their retirement and loved to travel, visiting 49 states and fourteen foreign countries. A lifelong member of the United Methodist Church, Emma served as Methodist Conference President of the United Methodist Women, and was elected to the General Conference and to the Episcopacy Committee of the Jurisdiction. She demonstrated, counseled, and nurtured other women in their Christian beliefs and principles. Emma was a devoted wife and mother, often left alone to care for her five energetic and independent-minded children while her husband travelled on church business. She raised her children to have a healthy respect for women, strong leadership, and Christian values. She was a loving grandmother and great-grandmother. During the mid-1960s she volunteered at the former Tuberculosis Hospital in Mt. Vernon. She was an excellent seamstress, won many county fair premiums for her arts and crafts especially crochet and needlepoint, and was an avid gardener and crossword puzzle enthusiast. Funeral Services for Emma Smith will be Monday, July 12 at 11:00 am in the First United Methodist Church, Carbondale with Rev. Howard White officiating. Interment will follow in Pleasant Grove Memorial Park. Visitation will be from 10:00 am until the hour of service. Memorials may be made to the United Methodist Women’s Missions and will be accepted at the services. Crain Pleasant Grove-Murdale Funeral Home is in charge of arrangements.

The family of Emma Smith created this Life Tributes page to make it easy to share your memories.