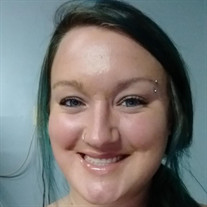 Erica Layne Smith, 33, of Crainville passed away unexpectedly on Sunday, August 16, 2020 in Marion. She was born on April 9, 1987 in Herrin to Eric and Kristin Yancey Smith. She graduated from Herrin High School in 2005 and was employed at Karen Hart, Inc. in Herrin. Erica was a beloved daughter, granddaughter, sister, cousin, niece and friend. She had a big heart and was a loving, compassionate, thoughtful and caring person who always put others ahead of herself. Erica never met a stranger and had many friends. She was a free spirit and enjoyed nature and the outdoors and loved to hike, fish and swim. She also enjoyed spending time with her family, especially her younger cousin, Cali Katheryn McGinnis. She was an avid animal lover as well. She is survived by her parents, Eric and Kristin of Creal Springs; brother, Keegan Smith (Fiancé Katie Prater) of Mary Esther, FL; grandmother, Maxine Smith of Marion; mawmaw, Jolene Yancey of Energy; uncles and aunts, Dr.’s Mark and Gail Smith of Johnston City, Brad and Tracey Smith of Herrin, Tara and Bob Deaton of Herrin, John and Jamie Yancey of Marion, Jennifer and Troy McGinnis of Carbondale and aunt, Leslie Smith of Carterville; several great aunts and uncles, cousins, and countless friends and her four beloved cats. She was preceded in death by her grandfather, Kenneth Smith and pawpaw, John Yancey; uncle, Chad Smith. Erica was a ray of sunshine and an indescribably beautiful rainbow and she lived and loved and will forever be with us. The family will host a private memorial gathering at a later date. Memorials may be made to Free Again Wildlife Rehabilitation, 4029 Big Muddy Rd., Carterville, IL 62918.

Erica Layne Smith, 33, of Crainville passed away unexpectedly on Sunday, August 16, 2020 in Marion. She was born on April 9, 1987 in Herrin to Eric and Kristin Yancey Smith. She graduated from Herrin High School in 2005 and was employed at... View Obituary & Service Information

The family of Erica Layne Smith created this Life Tributes page to make it easy to share your memories.