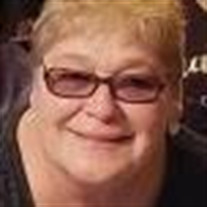 Frances L. Cavness, age 63, of Grand Tower, Illinois, formerly of Wolf Lake, Illinois, passed away on Friday, November 27, 2020 at 7:20 a.m. at her home. Frances was born on January 25, 1957, in Carbondale, Illinois, a daughter of Jack Ray Taylor and Sandra Jean Spicer. She was united in marriage to Roger Dale Cavness on July 20, 1977 and he preceded her in death on January 8, 2016 after 38 years of marriage. Frances was a longtime employee of Dyno-Nobel in Wolf Lake. She loved chickens and roosters, visiting with her friends at the Duck Inn Tavern, which is her family owned and operated restaurant, and spending time with her family. Survivors include her daughter, Melissa Cavness of Grand Tower; her son, Nathan (Dianna) Smith of Anna, Illinois; her father, Jack Taylor of West Frankfort, Illinois; four grandchildren, Darien LeFevre of Grand Tower, Blake H. LeFevre of Jonesboro, Amber Smith and Justin Smith, both of Anna; one great-grandson, Ryker Dale Ford; two sisters, Debra Norman of Versailles, Missouri and Jackie Taylor of West Frankfort; her special, dear friends, Marilyn “Hag” Cripps, Rhonda Robertson and Retha Clover; her three fur babies, Cricket, Violet and Buttercup; and numerous nieces, nephews, other relatives and friends. She was preceded in death by her mother, Sandra Spicer; husband, Roger Cavness; one sister, Sherri Briese; and her granddaughter, Haleigh Slusher. Funeral services will be held at Crain Funeral Home in Cape Girardeau, Missouri on Wednesday, December 2, 2020 at 12:00 p.m. Visitation will be held on Wednesday from 10:00 a.m. until the time of service. Interment will be in Walker Hill Cemetery in Grand Tower on Wednesday at 2:30 p.m. Memorial donations may be made to the American Diabetes Association or the American Cancer Society and will be accepted at the funeral home. Crain Funeral Home in Anna-Jonesboro has been entrusted with the arrangements.

The family of Frances L. Cavness created this Life Tributes page to make it easy to share your memories.

Send flowers to the Cavness family.