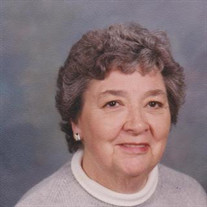 Frances Ann Andrew Child, 91, died at 5:20 a.m., Monday, September 28, 2020, at Manor Court in Carbondale. Frances was born July 2, 1929, at the family home in White Ash to William and Charlotte (Worth) Andrew. The Andrews moved to Noah Street in Johnston City in 1933 and Frances remained there until her marriage on September 28, 1951, in St. James’ Episcopal Church, Marion, to Robert Chase (Bob) Child, then of Quincy. Frances attended the public schools in Johnston City and graduated from high school in 1947. She enrolled at Southern Illinois University, where she received a Bachelor of Science degree in 1951. Early residences in Quincy, Springfield and Peoria preceded a move to Carbondale in 1956 at the beginning of Bob’s employment at the University. She was an enthusiastic homemaker, mother and wife. She served as an active member of St. Andrew’s Episcopal Church and as Association chairman for the Carbondale Girl Scouts, Shagbark Council. She enjoyed her long-time membership in Beta Sigma Phi Sorority. Her life memberships in the SIU Alumni Association and the Custer Battlefield Preservation Committee and its 800 Club were additional sources of satisfaction. Knitting, crocheting and reading contributed to quiet times. Physically active, Frances participated in swimming, mall-walking, exercise classes and golf with a number of friends—the Nickel Putters. Frances’ formal employment began after her children were raised. In addition to support staff activity in her husband’s firm, she worked as secretary in the offices of the Southern Illinois Area Agency on Aging and SIU’s Ulysses S. Grant Association; and, beginning in 1977, as Carbondale Complaint Information Officer and administrative secretary to Carroll J. Fry during his tenure as city manager. Retiring on Fry’s resignation in 1983, she opened and operated The Needleworks, a yarn shop at 700 West Main Street. When she closed the shop 1987, her final retirement included more reading, family visits and travel. She is survived by her daughters, Chanda Ann Child and husband John Wayne McKown of Carbondale, and Tressa Jane DiGiorgio and husband John Joseph DiGiorgio of Summerfield, North Carolina; daughter-in-law Heidi Fisher and granddaughter, Hillary Child of Coeur d’Alene, Idaho; three grandsons, Ian DiGiorgio, his wife Tamara DiGiorgio and their daughters, Adalyn and Reese DiGiorgio of Greensboro, North Carolina; Jared DiGiorgio, his companion, Rebecca Jackson and their son Jordi DiGiorgio of High Point, North Carolina; and Joel DiGiorgio, his son John Cohen DiGiorgio, his daughter Annie DiGiorgio, and Lauren Cooklin, mother of Cohen and Annie, of Greensboro, North Carolina; a niece Karen Andrew Snow of Marion and a nephew, Keith Andrew of East Peoria; and a cousin, Thomas Murrah and wife Donna of Herrin. She was preceded in death by her parents; husband; son Jeffrey Andrew Child of Coeur d’Alene, Idaho; an infant sister, Charlotte; a brother, William (Bill) Andrew and sister- in-law Juanita (Columbo) Andrew of Johnston City; her paternal grandparents William and Margaret (Russell) Andrew of West Frankfort; and maternal grandparents Charles Thomas and Frances Ann (Wardle) Worth of Johnston City. Frances’ family thanks the staff at Manor Court for the care and kindness they showed our mother, grandmother, aunt and cousin during the years she resided there, especially the last weeks of her life. Memorial donations may be made to the Alzheimer’s Association at https://www.alz.org. A private memorial service hosted by the family will be held on Saturday, October 3, 2020. Inurnment of ashes will be at a later time. Crain Pleasant Grove-Murdale Funeral Home is in charge of arrangements.

The family of Frances Ann Child created this Life Tributes page to make it easy to share your memories.

Send flowers to the Child family.