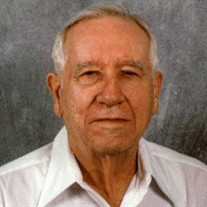 Fred Moallankamp, age 98, of Olmsted, formerly of Mound City, passed away on Tuesday, April 13, 2021 at 10:34 p.m., just four days before his 99th birthday. Fred was born on April 17, 1922 in Mound City, Illinois. He was the much loved son of Sylvester Jackson and Beulah Mae (Dumm) Moallankamp. Fred was a robust character from his many life experiences. He was an E2 in the Navy during WWII on the USS Saratoga, one of the Navy’s first aircraft carriers. Upon return from the war, he married Bertha and whisked her off to Chicago where he worked several jobs before returning to his hometown of Mound City. He then became employed as a lineman for the City of Mound City, then began running a gas station and tavern. His restless nature drove him to work also for Mound City Warehouse and Fiberglass Division at Crain Enterprises. Finally, Fred settled down at Meridian School before retiring at 62 to focus his attention on Bertha, convinced he would not live past 65. After a well-deserved retirement, Fred and Bertha spent their time in leisure, going to the local restaurants daily to eat and visit with their many friends. A routine that Fred continued with his son Randy, after Bertha’s passing on June 17, 2010. Fred’s energetic nature kept him moving, active, and driving until the past year. He will be sorely missed by his community. He is survived by his son, Randy (Kelly Klein) Moallankamp, grandson, Brent Moallankamp and many other nieces, nephews and other relatives. He was preceded in death by his parents, brothers Paul and Harlan, as well as his loving wife, Bertha Mae (Fiessinger) Moallankamp. Graveside Services will be held at Mound City National Cemetery Wednesday, April 21, 2021 at 10:00 a.m. with military honors accorded by the U.S. Navy and area veterans. Crain Funeral Home in Cairo has been entrusted with the arrangements.

The family of Fred Moallankamp created this Life Tributes page to make it easy to share your memories.

Send flowers to the Moallankamp family.