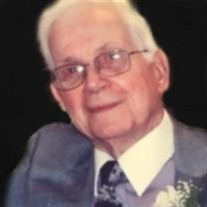 Fred Moyers, 96, of Mounds passed away at 8:10 AM on Thursday, August 13, 2020 at his daughter’s home in Marion. He was born September 20, 1923 in Mound City, to Thomas Oren and Lena Irena (Hayden) Moyers. He married Helen Tally on February 6, 1943. Fred was inducted into the Army on March 2, 1943. From March 1943 to May 1944, Fred trained to be a soldier and also trained to be an engineer and top turret gunner on a B-26 Air Force bomber. He took gunnery training at Fort Myers, Florida and airplane mechanic school at Goldsboro, North Carolina. On May 10, 1944 Fred departed for England, arriving on May 20, 1944. He joined the 9th Air Force 394 Bomb Group, 587 Bomb Squadron in England to prepare for the Normandy Invasion. Their first targets were v-weapon sites, bridges, airdromes, and gun emplacements. On D-Day, June 6, 1944, they bombed gun positions at Cherbough, afterwards striking communications, fuel supplies and strong points in support of the Normandy Campaign. They took part in the “Battle of the Bulge” in December 1944 to January 1945. Fred flew over enemy Germany for 8 months and then was shot down on his 45th mission and lived with the Germans for 3 months. His battle and campaign ribbons were: European Africa Middle East Ribbon with 4 bronze stars, 2 overseas service bars, air medal, and 6 oak leaf clusters. Fred was honorably discharged from the service on September 6, 1945. After his service, Fred became a certified Entomologist. He worked for Union Carbide for 17 years and was the owner and operator of Moyers Termite Control. He also held the position of Pulaski County Circuit Clerk until his retirement. Fred was also a licensed Real Estate Agent in Illinois and Missouri. He always loved learning about new things. He was a lifetime member of 75+ years at the VFW in Mounds and a board member of the Mounds First United Methodist Church. Fred is survived by his wife, Helen; daughter, Emily Jiran of Marion; son, Brian (Ronna) Moyers of Mounds; granddaughters, Jaymie Nunnery of Mt. Vernon, Racheal Robison of St. Louis, MO, Sarah McLemore of Franklin, TN; grandson, Christian Howell of Marion; great grandchildren, Brian Nunnery and Eli Nunnery both of Mt. Vernon, Jack McLemore, Luke McLemore, Andrew McLemore, and Kate McLemore all of Franklin, TN, Ellie Howell of Marion; many nieces, nephews and other relatives. He was preceded in death by his parents and sister, Gladys Louise Smith. Visitation will be held from 10:00am to 12:00pm on Monday, August 17, 2020 at Mounds First United Methodist Church. Funeral services will begin at 12:00pm on Monday at the church with Pastor Doug Atkins officiating. Interment will follow at Mound City National Cemetery with military honors provided by the Illinois honor guard and local veterans. Groups of 50 people at a time will be allowed in to pay their respects. Those attending the visitation and funeral service are requested to observe customarily accepted social distancing procedures. All attendees are reminded that, in accordance with recently announced State of Illinois guidelines, masks or face coverings are required in public spaces. Memorial contributions may be made to Mounds First United Methodist Church. Envelopes will be provided at the church.

The family of Fred Moyers created this Life Tributes page to make it easy to share your memories.

Send flowers to the Moyers family.