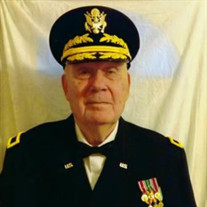 General Robert C. Waldron, Jr., Ph.D., age 91 of Carbondale, passed away Wednesday, February 16, 2022 in Heartland Regional Medical Center, Marion. He was born June 19, 1930 in Bolivar, MO to Robert and Nell (Pope) Waldron, Sr. He was baptized at the age of 16 in the First Baptist Church of Murphysboro. He remained strong in his protestant faith. On May 14, 1948 he enlisted as a private in the Illinois Army National Guard in Murphysboro. He was federalized for the Korean War in 1951, serving with the NATO HQ, Izmir, Turkey as NCOIC of Mess, Supply and Procurement. He advanced to the grade of Master Sergeant and received a direct commission to the rank of 2nd Lt. His command assignments consisted of HHCo (1) Selected Reserve Force, Carbondale; Bn Commander, 347th P & A Bn, Marion and Hospital Commander, 25th CSH, St. Louis, MO. He was a graduate of the US Army War College. He proudly retired as a Brigadier General in the Illinois Army National Guard with a total of 42 years of faithful service. He received the Meritorious Service Medal; two Army Commendation Medals; Army Good Conduct Medal; National Defense Service Medal; three Armed Forces Reserve Ribbons; two NCO Academy Ribbons; Army Service Ribbon; Army Overseas Ribbon and various Illinois Army National Guard Service Ribbons. He was a holder of three degrees from SIU-C. A founding president of the Civil Service Council; a founding member of the SIU Vet’s Club and a faculty adviser to several student organizations. He held life memberships in SIU Alumni Association; Reserve Officers Association; National Rifle Association; Army War College Alumni Association and Korean War Veterans National Museum and Library. He also held memberships in the Association of the US Army, charter member; and Paul Harris Fellow; Rotary Breakfast Club of Carbondale; AF&AM #498, Patton Commander; President of Little Egypt, MOAA and the American Legion, Paul Stout #127, Murphysboro. He had positions at SIU-C, Purchasing Assistant; Administrator in University Health Services; Researcher; and Lecturer in the Departments of Finance, Management and Marketing. He proudly served in these positions for 35 years. He had also taught at SEMO School of Business for 2 years. He loved to travel all over the world and participated in the American Volks March Association walking 6.2 miles in every state but Alaska with his companion. He is a member of the United Methodist Church of Ziegler. General Robert C. Waldron, Jr. is survived by his son, Gary Waldron; a grandson, John Waldron; a longtime companion of 50 years, Muriel Narve; other relatives and a host of friends. He was preceded in death by his parents and a son, Mark Calvin Waldron. Funeral Services for General Robert C. Waldron, Jr. will be Tuesday, February 22, 2022 at 2:00 pm in Crain Pleasant Grove-Murdale Funeral Home with Pastor Lori Van Horn officiating. Interment will be at a later date in the Arlington National Cemetery with full military honors accorded. Visitation will be from 11:00 am until the time of service at the funeral home. In lieu of flowers, memorials can be made to the Veteran’s Honor Flight of Southern Illinois and/or the United Methodist Church of Ziegler and will be accepted at the funeral home. His motto he lived by: BE ALL YOU CAN BE, SERVE GOD, FAMILY AND OUR COUNTRY.

The family of General Robert C. Waldron Jr created this Life Tributes page to make it easy to share your memories.

Send flowers to the Waldron family.