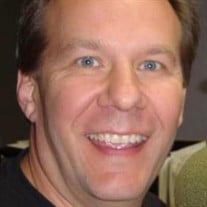 George David Baron, age 58, of Poplar Bluff, Missouri, and formerly of Cape Girardeau, Missouri, passed away surrounded by family on December 29, 2021. George was born on December 9, 1963 in Fort Campbell, Kentucky. He graduated from Cape Central High School in Cape Girardeau in 1982 and attended Southeast Missouri State University. Always the life of the party and perpetually upbeat, George enjoyed making everyone around him laugh whenever he could. In 1985, he welcomed his son Adam David Baron, with whom he shared his love of all things rock. George was a talented drummer and a founding member of the band Octane Twilight. He worked in sales at Horizon Music for many years and appreciated every opportunity to discuss his favorite bands: Thin Lizzy, UFO, The Scorpions, and Rainbow (to name a few). In his free time, he liked watching classic slapstick and cartoons—particularly, The Three Stooges and The Simpsons—along with any and every Bruce Lee movie. George loved Schnauzers and would take Max, and later Remo, with him wherever he could. Friends and family of George will miss his endless jokes, outgoing personality, and infinite supply of music trivia. George is survived by his parents, George Andrew and Carolyn; his sister, Melanie (Ryan Yamnitz); and his son, Adam. He was preceded in death by his grandparents, Raymond Barks, Wilma Barks, and Emily Baron; and his aunt, Margaret Austin. Funeral services will be held at Crain Funeral Home in Cape Girardeau on Monday, January 3, 2022 at 1:00 p.m. with Reverend Paul Short officiating. Burial will follow in New Lorimer Cemetery in Cape Girardeau. A time of visitation will be held on Monday from 11:00 a.m. until the hour of service at the funeral home. In lieu of customary remembrances, the family requests memorials be made to Trinity Lutheran Church or Trinity Lutheran School. Envelopes will be available and accepted at the funeral home. Arrangements have been entrusted to Crain Funeral Home and Cremation Service in Cape Girardeau.

The family of George David Baron created this Life Tributes page to make it easy to share your memories.

Send flowers to the Baron family.