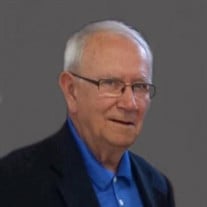 George W. Warren, Sr., age 79, of Cobden, passed away on Tuesday, January 5, 2021 at 2:30 p.m. at Barnes-Jewish Hospital in St. Louis, Missouri. He was born on February 14, 1941 in Franklin County to Clyde Davis and Ethel M. (McNeal) Warren. George married Linda Mangold on June 30, 1962 at the 1st Baptist Church in Anna. George attended Southern Illinois University, earning an associate degree. He then began a career in sales of copiers and office equipment. That career led him to his life’s work and eventually the ownership of T & I Office Equipment, which he and his wife, Linda, owned and operated from 1996 to 2020. George had a passion for sports and while at SIU he lettered in pole vaulting. In the late 50’s George helped start a band called “The Four Vests,” as the drummer. Although they are no longer together, they enjoyed the opportunity to reunite and play for benefits and class reunions. George was a member of the Benton Rotary Club and the Kiwanis Club in Anna, where he was an officer, a past Lieutenant Governor, and the I-I District Secretary. He was a 33rd degree Mason and a Shriner. George was a man of faith and a member of the 1st Evangelical Presbyterian Church where he served as a deacon. He was able to display his musical gift as a member of the praise band. He especially enjoyed his men’s Bible class. Besides his wife of 58 years, he is survived by his son, George W. Warren Jr. (Sarah M. Thomas) of Georgetown, TX; four grandchildren, George W. Warren III of San Antonio, TX, Carl Andrew (Savannah) Warren of San Antonio, TX, Benjamin Davis Warren of College Station, TX, Hilleary Sarah Warren of Austin, TX; brother, Max Edward Warren of Cobden; sister, Carmen Elaine Garland of Wheatland, WY; nieces, nephews, and other relatives. He was preceded in death by his brother, Harry Warren. A pass-through will be held on Friday, January 8, 2021, from 4:00 p.m. to 7:00 p.m. and on Saturday, January 9, 2021 from 9:00 a.m. to 10:00 a.m. at Crain Funeral Home in Anna. Funeral services for George W. Warren, Sr. will be held on Saturday, January 9, 2021 at 10:00 a.m. at the funeral home with David Fischler and John Hughey officiating. Memorials may be made to the Kiwanis Club of Anna or the Deacon’s fund at the 1st Presbyterian Church of Anna and will be accepted at the funeral home.

The family of George W. Warren Sr. created this Life Tributes page to make it easy to share your memories.

Send flowers to the Warren family.