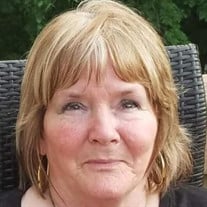 Georgia (Capshaw) Anderson, age 62, of Perryville, formerly of Cape Girardeau, passed away on Monday, December 20, 2021 at Saint Francis Medical Center. She was born on July 31, 1959 to Herschel and Janet (Snyder) Capshaw in Cape Girardeau. Georgia married David Anderson in 1993, and he preceded her in death in 2004. Georgia worked as a presser for Ken’s Cape Cleaners and a homemaker. She attended the Cape Cowboy Church. Georgia loved bingo, traveling with her friends, and her cats. Her devotion to family was the primary motivation in her life. Survivors include her daughters, Misty Capshaw and Stephanie Carlson; son, Jamie Ozment; seven grandchildren, Alivia, James, Tera, Shayla, Remi, Colton, and Payton; brother, Doug (Doris) Gleason; significant other, Lynn Leible and his children, Misty, Sarah, and Zachary; numerous nieces and nephews; brother-in-law, Lynn Anderson; sister-in-law, Bernell Abercombie, Joyce Anderson, and Pam Anderson; and several other relatives and friends. She was preceded in death by her parents and husband, David Anderson. Visitation will be Wednesday, December 22, 2021 from 4:00 p.m. to 7:00 p.m. at Crain Funeral Home in Cape Girardeau. Services will follow at 7:00pm. Interment will take place at a later date at Cummins Cemetery in McClure, Illinois.

The family of Georgia Ann (Capshaw) Anderson created this Life Tributes page to make it easy to share your memories.