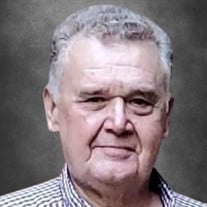 Gerald “Jerry” Cruse, age 71, of Dongola, was called to be with his Lord and Savior on Wednesday, March 30, 2022 at home surrounded by his loving family. He was born on April 17, 1950 to Charles Oliver and Leota (Smith) Cruse in Anna. Jerry married Janet Hase on September 12, 1970, and she survives. Jerry retired in 2009 as an ironworker for over 35 years. During this time, he owned and operated a filling station in Dongola, as well as a grain and livestock farm with his family. After retirement, he worked for IDOT during the winter months for nine years. Jerry had a passion for fixing things and pulling tractors. He enjoyed being outside and camping with his family and friends. He also loved attending his children and grandchildren’s activities, wherever they may be. Jerry was a man of faith serving as a deacon at the First Baptist Church in Dongola along with teaching Sunday School there and at Mt. Olive Baptist, where he was a member. He, alongside his wife, worked with the Illinois Baptist Association for Disaster Relief. They volunteered many hours and traveled several places to help those that were in need. Besides his wife of 51 years, he is survived by his son, Lane (Deanna) Cruse of Anna; daughter, Leslie (Stanley) Treat of Dongola; five grandchildren, Ashton (Jake) Casey, Raegan Cruse, Riley Cruse, all of Anna, Dalen Treat and Evan Treat, both of Dongola; two great-grandchildren, Aliyah and Paisley Casey of Anna; brother, Gaylon (Goldie) Cruse of Dongola; sister-in-law, Joyce (Marion) Hill of Dongola; brother-in-law, Jerry (Sheila) Hase of Anna; and many nieces, nephews, other relatives and friends. He was preceded in death by his parents and a brother, Larry Wayne Cruse. Funeral service will be held on Saturday, April 2, 2022 at 1:00 PM at Crain Funeral Home in Dongola with Rev. Paul Sadler and Rev. Victor Duckworth officiating. Visitation will be from 10:00 AM until the time of service at the funeral home. Interment will follow at Friendship Cemetery. In lieu of customary remembrances, the family request with gratitude that memorial contributions may be made to Residential Hospice, and envelopes will be provided at the funeral home.

The family of Gerald "Jerry" Cruse created this Life Tributes page to make it easy to share your memories.

Send flowers to the Cruse family.