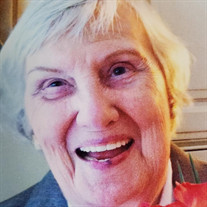 Gerda “Ann” Willis, 87 years old, went to be with our Lord at 12:13am on Saturday, August 7, 2021 at The Lutheran Home in Cape Girardeau, MO. She was born on August 10, 1933 in Karlsruhe, Germany, along with a twin brother, Gerhardt to Frederick and Anna (Sommer) Baumer. Her other siblings are: Werner Baumer, Fritz Baumer, Gunhilda Baumer and Heinie Baumer. In Germany, she met and married Calvin Ashworth, Sr., and then moved the United States where she raised seven children. She went on to marry Claude Eugene Willis, the love of her life. While raising her young family, Ann learned to speak and write English. She proudly went on to study and pass her Citizenship Test and become a United States Citizen. After the children were grown, she worked for many years at Southeast Missouri Hospital. She had many fond memories from her time there and the friends she made. Ann is survived by her children, Susan (Jerry) Vaughn, Monika (David) Olson, Calvin Ashworth, Alvin Ashworth, Michael (Connie) Ashworth, Donald Ashworth, Tony (Marla) Ashworth along with many grandchildren and great-grandchildren, nieces, nephews and friends. She is preceded in death by her late husband, Claude Eugene Willis, and her parents. Per her wishes, cremation rites will be accorded. A private service will be held at Mound City National Cemetery. In lieu of flowers, memorials may be made to The Lutheran Home in her memory. The family would like to sincerely thank the staff members at the Lutheran Home/Hospice Unit for the compassionate care they provided to our Mother. Crain Funeral Home in Tamms is in charge of arrangements.

The family of Gerda Ann Willis created this Life Tributes page to make it easy to share your memories.

Send flowers to the Willis family.