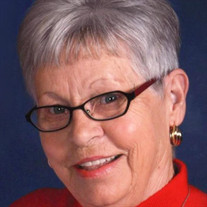 Gloria Jane Kerr-Garrison-Sawyer (82) left the arms of her beloved husband William (Bill) Sawyer early Friday morning September 24, 2021, to be with her heavenly Father. Jane spent her last days with Bill and daughter Kim at her side helping with her struggles with COPD, congestive heart failure, pneumonia and other complications. Jane was 9th born of 11 children to Joseph and Ida (Hickson) Kerr. She is survived by two sisters Doris Haynes of Newark DE, Joan Dohm of Turlock CA and one brother Alan Kerr (Marilyn) of Ullin, IL. Upon high school graduation Jane began her travels and settled in California where she met Kenneth Garrison and married six weeks later on September 20, 1957. Jane and Ken were blessed with daughter Kimberley and two sons John and Ward. Living in Merced, CA and Seattle, WA, Jane supported her husband as he pursued his career with the Boeing company by staying home with their children. After 15 adventurous years on the West Coast, the family returned to the Midwest and settled on a farm in Ash Grove, Missouri. Jane was no stranger to the demands of farm life and in addition to taking care of the home and farm she went to work full time as an office manager with Home Healthcare. Jane retired from Home Healthcare in 1994 and planned to spend her days in a new home on Table Rock Lake in Blue Eye, MO with her husband Ken who had been disabled from heart disease seven years prior. After 38 years of marriage, Jane was widowed on April 19, 1995, and found herself moving into her new home alone. God willed Jane not to be alone and sent angel Bill Sawyer to wipe her tears and hold her hand forever beginning with their marriage on February 15, 1997. Jane enjoyed 17 healthy years of travel with Bill visiting her favorite destination Hawaii numerous times. Travels also included trips to the Holy Land, Aruba, Costa Rica, Mexico, Canada and many other car and bus trips within the continental United States. Lung cancer cancelled Jane’s eighth Hawaiian trip in October of 2014. Bill endured and remained at Jane’s side for her final seven years battling her deteriorating health. Jane was multi-talented and not only could she run a perfect stitch crafting clothes and curtains for her homes and making homemade patterns and handmade quilts for each of her children and grandchildren, she could also sniff a bargain, play a joke, pull a calf, run a trot line, and catch, clean, batter, and fry a crappie. Jane worshipped the Lord at Cherry Street Baptist Church of Springfield, MO and practiced her faith sharing with those less fortunate in her community and beyond. Jane suffered the loss of her son Ward Garrison (50) in 2015. She is survived by her daughter Kimberley Meier (Gerry) of St. Charles, MO, son John Garrison (Gina) of Jefferson City, MO, and daughter-in-law Robin Garrison of Russellville, MO, grandchildren Kenny Meier (39), Ashley Meier (37), Zach Meier (36), Andy Meier (34), Shannon Butler (35), Audrey Garrison (24), Austin Garrison (22), and 13 great grandchildren. Visitation for Jane will be 10:00 a.m. – 11:00 a.m. Saturday, October 9, at Greenlawn Funeral Home East with services following at 11:00 a.m. In lieu of flowers memorial donations can be made to https://ozarksfoodharvest.org/donate/ Jane will be dearly missed but not forgotten by all who knew and loved her. Announcement courtesy of Crain Funeral Home in Ullin.

Gloria Jane Kerr-Garrison-Sawyer (82) left the arms of her beloved husband William (Bill) Sawyer early Friday morning September 24, 2021, to be with her heavenly Father. Jane spent her last days with Bill and daughter Kim at her side helping... View Obituary & Service Information

The family of Gloria Jane Kerr-Garrison-Sawyer created this Life Tributes page to make it easy to share your memories.

Gloria Jane Kerr-Garrison-Sawyer (82) left the arms of her beloved...

Send flowers to the Kerr-Garrison-Sawyer family.