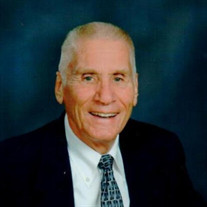 H. Ray Bush, age 86, of Makanda, passed away on Tuesday, February 2, 2021 at Manor Court in Carbondale. He was born on June 14, 1934 in Bloomington the son of Clyde Harold and Dorothy Mary (Jackson) Bush. He married Margaret “Maggie” Rich on September 2, 1955. Ray retired from Murphysboro High School after 25 years of teaching. However after retirement he found himself teaching another 9 years at John A. Logan College. He was a part of the Little Egypt Barber Shop Quartet and enjoyed singing with them for over 20 years. Ray also was a garden enthusiast. He was a member of Pleasant Ridge Baptist Church and the American Legion Post 127 in Murphysboro. Ray proudly served his country in the United States Navy during the Korean War. He is survived by his wife of 65 years, Margaret; daughter, Christine Bass and husband Michael, grandson, Kristopher Bass and wife Rebekah and their son, Aiden; grandson, Jackson Bass and wife Anne and their daughter Rae; grandson, Jeremiah Bass and wife Casie; daughter, Linda Crain and husband Terry; grandson, Mitch Murphy and wife Erica and their children, Liam, Elliot, and Augustus; granddaughter, Michelle McNemar and husband Sean and their children, Julianne and Declan. Ray was preceded in death by his father, Clyde Bush; mother, Dorothy O’Farrell; step-father, John O’Farrell. Services will be private. Interment will take place in Mound City National Cemetery with full military rites. Memorials may be made to the Alzheimer’s’ Association and can be mailed to the funeral home at 135 W. Vienna St., Anna, Illinois 62906.

The family of H. Ray Bush created this Life Tributes page to make it easy to share your memories.

Send flowers to the Bush family.