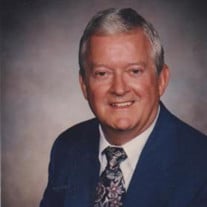 Howard William Shand, age 91 of Carbondale, passed away at home on Sunday, September 6, 2020 from congestive heart failure. He was born to Howard A. and Edith P. Shand in Pittsfield, MA on April 18, 1929. He was an alumna of Burlington High School and the University of Vermont, 1947-1951, majoring in Business Administration. He was immediately drafted for the army during the Korean War after completing his education. He was hired by Swift and Company following his army service and spent 11 years in the early development of IBM data processing for that company nationwide. Howard met his future wife, Regene Elaine Blazine in Chicago and they married on March 27, 1965. Because of the excessive travel involved with the Swift job, they decided to settle in Carbondale, where they purchased the University Cleaners and Shirt Laundry. Later, he was involved in several small business operations as an owner, landlord and investor. Regene was employed by Southern Illinois University for some 30 years while Howard was involved in his small business ventures until his retirement in 2011. Howard served the Carbondale community at various times with voluntary positions as President of United Fund, Lions Club and Carbondale Foundation for Better Environment. He was also a 65 year Shriner member, supporting their many free charitable services. Howard’s early family life included his loving parents, Howard and Edith Shand, as well as four sisters, Dottie, Phyllis, Marion and Shirley. His sisters had nine children, all of whom were a great joy to him. He is survived by his wife, Regene; his sister, Dorothy M. Ignazewski of Essex Junction, VT; a sister-in-law, Maria Blazine of Austin, TX as well as numerous nieces, nephews, their extended families and host of friends. Cremation rites have been accorded. Inurnment will be in Pleasant Grove Memorial Park Mausoleum. Memorials are encouraged and can be made to the Shriners Children's Hospital, Attn.: Development Office, 4400 Clayton Ave., St. Louis, MO 63110. Crain Pleasant Grove-Murdale Funeral Home is in charge of arrangements.

Howard William Shand, age 91 of Carbondale, passed away at home on Sunday, September 6, 2020 from congestive heart failure. He was born to Howard A. and Edith P. Shand in Pittsfield, MA on April 18, 1929. He was an alumna of Burlington High... View Obituary & Service Information

The family of Howard Shand created this Life Tributes page to make it easy to share your memories.

Howard William Shand, age 91 of Carbondale, passed away at home...

Send flowers to the Shand family.