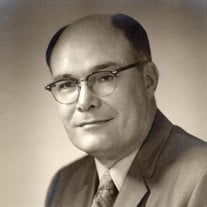 James (Jim) William Hahn, 94, of Cape Girardeau, died on Wednesday, November 18, 2020 at The Chateau Girardeau. Jim was born in Springfield, Missouri on February 2, 1926. He was one of identical triplets with the babies collectively weighing 22 pounds. Their parents were unable to care for them and they were sent to the Missouri Children’s Home in St. Louis for adoption. After failed attempts to place the boys together, they were adopted by separate families. The 3 would not be reunited for 57 years. Jim was adopted by Quincy and Clestyel (Waller) Hahn of Poplar Bluff. Jim lived a comfortable life as an only child. One day while Jim was a teenager, he was summoned to the drug store where he worked to meet an identical boy visiting from the Bootheel. It turned out to be one of his brothers, but neither one of them knew they had been adopted and they parted ways after noting that they shared the same birthday. Jim graduated from Poplar Bluff High School in 1944 and immediately entered the Army. After basic training he was shipped to Europe as part of the 94th Infantry Division of General Patton’s 3rd Army. His unit fought in the Battle of the Bulge, where they experienced the most intense combat of WWII, sustaining heavy casualties. Jim was wounded but returned to his unit as they fought their way across Germany. Jim declined to discuss his combat experiences but deeply admired General Patton as a leader. He earned a Purple Heart, Combat Infantry Badge, Good Conduct Medal and EAMET Ribbon (European-African-Middle Eastern Theatre) and was honorably discharged as a Staff Sergeant. After the war, Jim returned to Poplar Bluff and married Mary Heady, his high school sweetheart. They were married for 68 years until her death in 2018. They raised 4 children, initially in Sikeston and then in Cape Girardeau. Jim spent his entire career with the materials division of the Missouri highway department in Sikeston, retiring after 43 years of service. Jim was reunited with his triplet brothers, JC Burch and John Jones, in 1982 after being contacted by the Missouri Children’s Home. Their reunion was covered on national TV. Because of the rarity of identical triplets being separated at birth, Jim and his brothers agreed to travel to Minneapolis to participate in the Twins Study conducted by the University of Minnesota on genetic and environmental influences. Getting to know his brothers after 57 years of separation was a source of great joy for Jim, and the brothers talked often. Jim was a member of St Vincent De Paul Catholic Church in Cape Girardeau and the Knights of Columbus in Cape Girardeau and Past Grand Knight in Sikeston. He was a member of the American Legion Post 63 in Cape Girardeau and of the VFW in Cape Girardeau. Jim is survived by 2 sons, John (Jane) Hahn of McLean, VA and Bruce (Judy) Hahn of Pacific, MO; 1 daughter, Chris Sirimaturos of Cape Girardeau; 6 grandchildren, Brian (Amy) Sirimaturos of Weldon Spring, MO, Michael Sirimaturos of Houston, TX, Christopher (Alex) Hahn of Cape Girardeau, Kayla (Brandon) Graves of Overland Park, KS, Elisabeth (Seth) Chappell of McLean, VA and David (Mary) Hahn of Raleigh, NC; 4 great grandchildren, Wyatt and Will Sirimaturos of Weldon Spring, MO and Grace and David Chappell of McLean, VA; special niece and nephew, Becky and Steve McKinney of West Point, MS; special cousin, Chuck (Janet) Heady of Cape Girardeau; best friend and honorary son, Mike (Linda) Myers of Sikeston; and many other relatives and friends whom he loved dearly. He was preceded in death by his wife, Mary Hahn; son, James W. Hahn II; brothers, J.C. Burch, John Jones, Vernon Martin and half sister, Norma Alexander. Visitation will be Monday, November 23, 2020 from 10:00 to 11:00 AM at Crain Funeral Home & Cremation Service in Cape Girardeau. Funeral services will be held at 11:00 AM on Monday, November 23, 2020 at the funeral home with Deacon Mark Kiblinger officiating. Services will be live streamed online. Burial with full military honors will take place in St Mary’s Catholic Cemetery in Cape Girardeau. The family would like to give a special thank you to Dr. Kenneth Decoursey for his many years of medical care and all of the staff at Chateau Girardeau (The Gardens) for their loving care and friendships over the past 2 ¾ years. In lieu of flowers, memorials may be made to St Jude Children’s Research Hospital. Envelopes will be available at the funeral home. Crain Funeral Home & Cremation Service in Cape Girardeau is in charge of arrangements.

James (Jim) William Hahn, 94, of Cape Girardeau, died on Wednesday, November 18, 2020 at The Chateau Girardeau. Jim was born in Springfield, Missouri on February 2, 1926. He was one of identical triplets with the babies collectively weighing... View Obituary & Service Information

The family of James "Jim" William Hahn created this Life Tributes page to make it easy to share your memories.

Send flowers to the Hahn family.