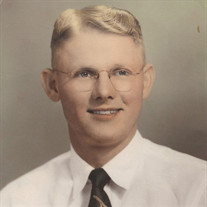 James David Peacock, aged 94, of Anna, passed away at 7:56 a.m. on March 11, 2022, at the Anna Veterans’ Home. He was born on August 23, 1927, to James and Mary (Granito) Peacock in Virden, Illinois. He married his high school sweetheart, Beulah Rose Westfall, on February 10, 1952, and she preceded him in death on October 14, 2014. James (Jim) Peacock graduated from Virden High School in 1946. He worked for the railroad for a few years during and after high school. Then he worked at the North Mine in Virden, Illinois, for two and a half years, and he may have been its last surviving employee. After two years in the military during the Korean War, he worked as a carpenter and then took a job with Freeman Crown Mine in Farmersville where he worked from 1957 to 1971. When the Crown mine closed, he moved his family to Southern Illinois where he continued to work for Freeman United at the Pittsburg, Illinois, mine. After retiring from coal mining, he set up a leather goods shop specializing in coal mining products: James D. Peacock Leather Company. He was a member of the Virden Illinois American Legion and the Virden First Christian Church for many years. He is survived by his daughter, Nancy (Alan) Schrock of Albuquerque, New Mexico; son, James C. (Allison) Peacock of Goreville, Illinois; grandson, David (Danielle) Schrock of Midland, Michigan; James (Emily) Schrock of Albuquerque, New Mexico; and four great grandsons, Patrick, Andrew, and Thomas Schrock of Midland, Michigan, and James Austin Schrock of Albuquerque, New Mexico. Memorial services will be held in Virden, Illinois, at a later date. In lieu of customary remembrances, the family requests with gratitude that memorial contributions be made to Anna Veterans’ Home. Arrangements have been entrusted to Crain Funeral Home, Anna-Jonesboro.

The family of James "Jim" David Peacock created this Life Tributes page to make it easy to share your memories.

Send flowers to the Peacock family.