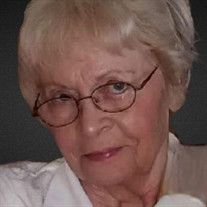 Janelle Eudy, 78, of Jonesboro was called home quietly on Tuesday, March 29th, 2022 at Carbondale Memorial Hospital. She was born October 28, 1943 the daughter of Leonard and Marie (Hines) Cooley. She was baptized March 10th 1957. She married Lynn Eudy on December 2, 1959. He preceded her in death on March 21, 2022. Janelle and Lynn loved their two sons, she was deeply involved in their achievements and success throughout their lives. She worked at Rural Health for numerous decades before retiring. After retirement, she enjoyed reading numerous books from her sister, and discussing genealogy and the Civil War with her brother. Later in life she began to greatly enjoy watching professional football but spending time with all her grandchildren and great-grandchildren was what she loved the most. She will be deeply missed. Janelle is survived by her two sons, Gregory Lynn Eudy and Michael and Gwen Eudy, both of Jonesboro; five grandchildren, Madelynn Eudy of Cape Girardeau, Lindyn Eudy, Marin Eudy, Ridley Eudy, and Seren Eudy, all of Jonesboro; a great-grandchild, Silas Eudy of Cape Girardeau; sisters, Marceline (Rev. Bill) Bohannon of Wood River, Venita Brafford of Herrin, brother, Earl Ray Cooley of Dongola ; and several nieces, nephews, cousins, other relatives, and friends. Reba Janelle Eudy was preceded in death by her parents; brothers, Vurl Deleen Cooley, Lowell Cooley, Larry Cooley, Richard Cooley and Leon Cooley; sister, Loretta Evins. The visitation will be held from 11:00 AM to 1:00 PM on Friday, April 1, 2022 at Crain Funeral Home in Anna. Funeral services will be immediately following visitation. Interment will follow in Jonesboro Cemetery. Memorials may be made to the Sunshine Inn Senior Center and envelopes will be available at the funeral home. Arrangements have been entrusted to Crain Funeral Home, Anna-Jonesboro.

Janelle Eudy, 78, of Jonesboro was called home quietly on Tuesday, March 29th, 2022 at Carbondale Memorial Hospital. She was born October 28, 1943 the daughter of Leonard and Marie (Hines) Cooley. She was baptized March 10th 1957. She married... View Obituary & Service Information

The family of Janelle Eudy created this Life Tributes page to make it easy to share your memories.

Janelle Eudy, 78, of Jonesboro was called home quietly on Tuesday,...

Send flowers to the Eudy family.