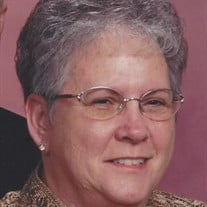 Joann Vick, 80, of Herrin, passed away Wednesday, May 29, 2019 at Baptist Health Hospital in Paducah, KY. Joann was born February 22, 1939 in Herrin to Lee & Minnie (Wilson) Watson. She was a homemaker. She attended Union Gospel Mission Church... View Obituary & Service Information

The family of Joann Vick created this Life Tributes page to make it easy to share your memories.

Send flowers to the Vick family.