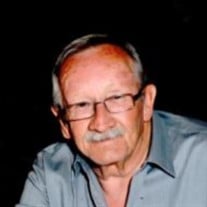 Joe Jones, age 75, of Goreville, formerly of Alvin and Georgetown, Illinois passed away Wednesday, May 13, 2020 at his home. He was born January 9, 1945 in Danville, Illinois to Vernice and Mary Suzanna (Lewis) Jones. He married Linda Fields on April 12, 1986 in Westville, Illinois. Joe was a truck driver for many years driving trucks for Ramsey Trucking in Danville, Illinois, Jones Trucking in Alvin, Illinois of which he was the owner operator, and worked for his son Jeff Jones, owner of Clarks Garage in Danville, Illinois as a shuttle driver, before retiring to Southern Illinois. He was an avid NASCAR fan and enjoyed watching every race he could. His favorite racers were Dale Earnhardt and Dale Earnhardt, Jr. Joe’s stepson, Paul Browne said it best, “It is with heavy hearts that my stepdad Joe Jones passed away this morning. He will be watching down on the NASCAR races with Dale by his side.” Joe is survived by his wife, Linda Jones of Goreville, IL; 6 children, Lori (Mike) Hutson of Chrisman, IL, Jimmy (Lisa) Jones of Alvin, IL, Jeff Jones of Veedersburg, IN, Michelle Jones of Chrisman, IL, Suzi Jones of Westville, IL and Charlie Jones; 1 stepson, Paul (Bryanna Ramsey) Browne of Goreville, IL; 1 sister, Ida Leeman of Danville, IL; Many grandchildren, great-grandchildren, other relatives and friends. He was preceded in death by his parents; brother, Charles “Bud” Jones and sister, Mary Ann Gordon. Cremation will be accorded. A memorial service hosted by the family will be held at Lori and Mike Hutson’s home (Joe’s daughter and son in law), 104 McKinley, Chrisman, IL 61924 on May 31, 2020 at 2:00 PM with Pastor Bob Cruea officiating. Dinner will be provided. Friends and family are all welcome to attend. Crain Funeral Home Egyptian Chapel in Energy, Illinois is in charge of cremation arrangements.

Joe Jones, age 75, of Goreville, formerly of Alvin and Georgetown, Illinois passed away Wednesday, May 13, 2020 at his home. He was born January 9, 1945 in Danville, Illinois to Vernice and Mary Suzanna (Lewis) Jones. He married Linda Fields... View Obituary & Service Information

The family of Joe Jones created this Life Tributes page to make it easy to share your memories.

Joe Jones, age 75, of Goreville, formerly of Alvin and Georgetown,...

Send flowers to the Jones family.