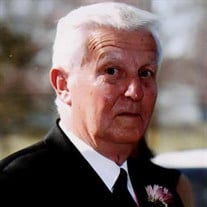 Joseph Kenneth Musgrove, age 93, of Cape Girardeau, Missouri, formerly of Anna, Illinois, passed away on Thursday, September 30, 2021 at the Lutheran Home in Cape Girardeau. Joe was born on September 8, 1928 in Detroit, Michigan, a son of Joseph and Helen (Cass) Musgrove. He married Susan “Jane” Dixon on September 11, 1948. Joe served his country in the Illinois National Guard. He was a foreman at the Florscheim Shoe Factory in Anna for over 40 years. Joe was a hard-working man and loved gardening and fishing. He was a member of Gospel Assembly Church in Anna. Survivors include his son, Kenneth (Paula) Musgrove of Calvert City, Kentucky; his daughter, Teena (Richard) White of Cape Girardeau; four grandchildren, Heather (Mark) Johnston, Benjamin (Manika) Musgrove, Lucas (Lindsay) Bingaman, and Taylor (Brett) Smith; eight great-grandchildren, Tyler, Briaunna, Gavin, Aniston, Deklan, Rowen, Sloan and Carson; a brother, Norbert Musgrove of Newport News, Virginia; a sister, Delores Eden of Detroit, Michigan; and numerous nieces, nephews, other relatives and friends. He was preceded in death by his parents; his wife of fifty-four years, Susan “Jane” Musgrove, who preceded him in death on December 27, 2002; and two brothers, Jerry and Ronald Musgrove. Visitation will be held at Crain Funeral Home in Anna on Wednesday, October 6, 2021 from 4:00 p.m. until 7:00 p.m. Graveside services will be held at the Anna City Cemetery on Thursday, October 7, 2021 at 11:00 a.m. with Reverend Jeff Workman officiating. In lieu of flowers, the family requests memorial donations be made to the Shriner’s Children’s Hospital or Heartland Sole Providers and will be accepted at the funeral home. Arrangements have been entrusted to Crain Funeral Home in Anna.

Joseph Kenneth Musgrove, age 93, of Cape Girardeau, Missouri, formerly of Anna, Illinois, passed away on Thursday, September 30, 2021 at the Lutheran Home in Cape Girardeau. Joe was born on September 8, 1928 in Detroit, Michigan, a son of Joseph... View Obituary & Service Information

The family of Joe Musgrove created this Life Tributes page to make it easy to share your memories.

Send flowers to the Musgrove family.