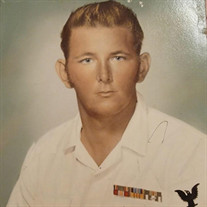 John William Giacoma, 75, passed away on Wednesday, January 26, 2022 at the Baptist Medical Center in Jacksonville, FL. John was born on November 26, 1946 in DuQuoin to Barbara Earle Sullivan and John Carroll Giacoma. He was in Southern Illinois by his mother Barbara Walker and step father Don Walker, along with his younger siblings Jimmy, Jerry Don, Debbie Jo and Billy. When John reached the age of 18, he decided that he wanted to serve our great nation and he enlisted in the Navy. His first duty station was at Mayport Naval Station Jacksonville. Soon after, he met Sherry Standridge who would later become his wife. John and Sherry had two children, John Giacoma and Melissa Giacoma. During their marriage, they had multiple duty stations such as Jacksonville, FL; Pensacola, FL; Boston, MA; Key West, FL; Virginia Beach, VA and Norfolk, VA. John was baptized in the Church of Jesus Christ of Latter Day Saints in 1971. John met his second wife, Gala and their two daughters Lori and Sheila in early 1974 and they wed in December 1974. They enjoyed over 40 years together and multiple duty stations such as Virginia Beach and Naples Italy. Upon his 20-year military retirement, John chose to keep serving our nation through his work with the Department of Defense and The Justice Department for another 11 years. Once retired completely, John and Gala chose to return to their home in Southern Illinois to spend time with their elderly parents. During their time together in Illinois they had several businesses including stain glass business and their food trucks, which they thoroughly enjoyed. Once he returned to Illinois, John also was able to rekindle relationships with his brothers, Jimmy, Jerry Don, Billy and sister in laws, Leitha, Shirley and Tracey. John also formed a relationship with his brother Steve and sister in law Cindy, this birth of this relationship brought John the utmost joy. John and Steve attended many fishing tournaments together as partners and they always had great stories to tell afterwards. John loved to hunt and fish, to watch female college sports, Hallmark movies and any Western ever made. John loved his family and his newest edition became a bright light for him, Wyatt and Grandpa were destined to be great buds. Wyatt was the best medicine for a grumpy old man, he put that twinkle back in John’s eye. John was preceded in death by his wife, Gala Giacoma; his parents, JC Giacoma, Bobbi and Don Walker; a sister, Debbi Jo Walker; two brothers, Bobbi Jo Walker and Jimmy Walker; a son-in-law Johnny Snyder; and a granddaughter Jessica Danielle Miller. John is survived by his four children, Lori and Jay Porter; Sheila Snyder; John Giacoma II; Melissa and Tony McMaster. Eight grandchildren, Lindsay Porter; Matt Porter; Jheri Miller; John Giacoma III; Kaysie Giacoma; Faith Raulerson; and Lucas and Lillyan McMaster. Four great-grandchildren, Zachary Porter; Nick and Ava Kvamme; and Wyatt Lane Miller. Three brothers, Jerry Don Walker (Shirley); Billy Walker (Tracy); and Steve Giacoma (Cindy); a sister in law, Leitha Walker and several nieces and nephews. Cremation rites have been accorded. A memorial service will be held on Monday, April 4, 2022 at 11am at Crain Funeral Home-Egyptian Chapel in Energy. Military Rites will be performed by the American Legion with assistance from the U.S. Navy. Inurnment will follow at Egyptian Memorial Gardens in Energy. Crain Funeral Home-Egyptian Chapel in Energy has been entrusted with the arrangements.

John William Giacoma, 75, passed away on Wednesday, January 26, 2022 at the Baptist Medical Center in Jacksonville, FL. John was born on November 26, 1946 in DuQuoin to Barbara Earle Sullivan and John Carroll Giacoma. He was in Southern Illinois... View Obituary & Service Information

The family of John William Giacoma created this Life Tributes page to make it easy to share your memories.

Send flowers to the Giacoma family.