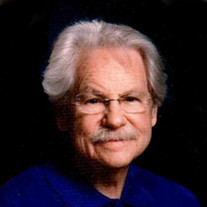 Dr. John J. "Jack" Whitlock of Carbondale passed away peacefully on Sunday, June 20 in the DuQuoin Hospital surrounded by loving family. Jack was born January 7, 1935 in South Bend, Indiana. He enjoyed 65 years of marriage to his loving wife, Sue Ann (Kirkman) Whitlock. Their life was filled with laughter and many happy memories. Jack proudly worked at the Studebaker company and at J.C. Penney as a window dresser as a young man in South Bend. He served as a Seaman Apprentice in the US Navy from 1953-56 and as a Corporal in the US Marine Corps Reserve from 1956-61. He received his Bachelor's degree in Art from Ball State University, Master's and Doctorate degrees in art from Indiana University. Dr. Whitlock taught art at Hanover College in Madison, IN; directed the Burpee Museum in Rockford, IL; directed the Brooks Gallery in Memphis, TN; and was the museum director/professor at SIU in Carbondale. Jack had memberships at the Masonic Lodge and Scottish Rite in both Indiana and Illinois and was an active member of the Marine Corps League & Rotary Club. He enjoyed participating in Civil War reenacting and living history from a variety of military historic time periods. Jack and his son, Mark were involved with the filming of several motion pictures and mini-series including; "North and South," "Alamo, the Price of Freedom," "Son of the Morning Star," "Rambo III," "Glory," "Far and Away," and "Ride With the Devil." Jack is survived by his wife, Sue Whitlock of Carbondale; daughter, Michele Whitlock of Carbondale; son, Mark (wife, Katherine) Whitlock of Springfield; daughter-in-law, Julie Horecker of Murphysboro; three grandchildren, Kristopher Horecker-Whitlock (wife Stephanie) of Carterville, Benjamin and Jack Whitlock of Springfield; great-grandchildren, Logan & Amelia Horecker-Whitlock; other relatives and a host of friends. He was predeceased in death by his beloved daughter, Kelly Ann Whitlock on December 9, 2015. A Masonic Service will be at 2:00 pm followed by the Memorial Service at First United Methodist Church, 214 W. Main St., Carbondale on Sunday, July 18, 2021. Visitation will be from 1:00 pm until the hour of service. Inurnment with military honors will follow in Pleasant Grove Memorial Park Mausoleum. A reception will follow at the First United Methodist Church. Memorial Contributions may be made to the Alzheimer’s Association and will be accepted at the Memorial Service. Crain Pleasant Grove-Murdale Funeral Home is in charge of arrangements.

The family of John "Jack" Joseph Whitlock created this Life Tributes page to make it easy to share your memories.

Send flowers to the Whitlock family.