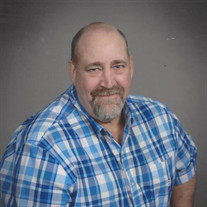 John W. Nehrkorn, age 61, of Pinckneyville, passed away peacefully after a lengthy and hard-fought battle with cancer on Monday, August 16, 2021 at 4:26 p.m. in Barnes-Jewish Hospital in St. Louis with his wife and sons by his side. John was born on July 29, 1960, in Pinckneyville, the youngest child of Gene and Glenna (Hammack) Nehrkorn. He married Donita Giacomo on October 24, 1981, at First Christian Church in Pinckneyville and she survives. To this union three sons were born. Early in his working career, John worked in the coal mines, but for the last thirty-six years, he has been a devoted employee of B & D Machine Works, first as a welder, later as a plant supervisor, and most recently in sales and technical services. John served the city of Pinckneyville as a volunteer fireman for thirteen years and for the last several years he has been the President of the Pinckneyville Rural Fire Protection District Board. He has also held the position of Chairman of the Board of Directors of the Pinckneyville Ambulance Service for many years. John was an extremely hard working man and was very proud of the work he did with B & D and the time he dedicated to both the Pinckneyville Rural Fire Protection District and the Pinckneyville Ambulance Service. John was a Christian and was a member of Friendship Church of Christ in Tamaroa. John enjoyed hunting, and especially loved fishing, but mostly, he loved spending time with his family. Survivors include his faithful wife of 40 years, Donita Nehrkorn; two sons, Justin Nehrkorn and Jordan Nehrkorn (fiancé, Abby Hartman); daughter-in-law, Brittny Nehrkorn (Drayson Westberry); his granddaughter, who was the light of his life, Alivia Nehrkorn; step-grandson, Holdyn Westberry; mother-in-law, Wanda Skorczewski; step-mother-in-law, Kathleen Giacomo; sister and brother-in-law, Jeanie and Alan Jenkel; brother and sister-in-law, Jeff and Michelle Nehrkorn; sister-in-law and brother-in-law, Debbie and Steven Hitt; brother-in-law, Dr. John Skorczewski; brother-in-law and sister-in-law, Charlie and Marty Skorczewski; nieces and nephews, Christina (Eric) Schlipf, Jamie Hitt, Casey (Shawn) Holderfield, Caleb Nehrkorn, Andrew (Kelsey) Moore, Stefanie Cordle, Zachary Buckman, J.P. (April) Elder, Matt (April) Skorczewski, Bryan Skorczewski, Bob Skorczewski and Sarah Kiliman; several great-nieces and great-nephews; uncle and aunt, Bill and Jo Nehrkorn; aunt, Mildred Nehrkorn; numerous cousins and other relatives; countless friends; and his two favorite dachshunds, his boys, Bruno and Brady. He was preceded in death by his parents; one son, Jeremy Nehrkorn; his fathers-in-law, John Skorczewski and Wayne Giacomo; several aunts and uncles; and a brother-in-law, Danny Giacomo. Visitation will be held at Friendship Church of Christ in Tamaroa on Sunday, August 22, 2021 from 4:00 p.m. until 7:00 p.m. and again on Monday, August 23, 2021 from 9:00 a.m. until the hour of service. Funeral services will be held at Friendship Church of Christ in Tamaroa on Monday, August 23, 2021 at 11:00 a.m. with Doug Phillips and Sam Eddy officiating. Burial will follow in Galum Presbyterian Cemetery in Pinckneyville. Memorial donations may be made to the Pinckneyville Ambulance Service. Envelopes will be available at the church during the visitation and service. Crain Funeral Homes of Southern Illinois has been entrusted with the arrangements.

John W. Nehrkorn, age 61, of Pinckneyville, passed away peacefully after a lengthy and hard-fought battle with cancer on Monday, August 16, 2021 at 4:26 p.m. in Barnes-Jewish Hospital in St. Louis with his wife and sons by his side. John was... View Obituary & Service Information

The family of John W Nehrkorn created this Life Tributes page to make it easy to share your memories.

Send flowers to the Nehrkorn family.