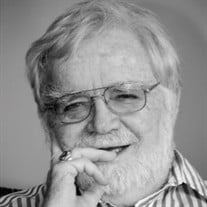 John Russell Rider passed away peacefully on February 17, 2021 at the age of 97 at Manor Court in Carbondale, IL, where he had lived since 2015. John, also known as Papa, was born in Westfield, IL on April 19, 1923. He was the son of Frederick Castle Rider and Alice Arminta (Zellers) Rider. John grew up in a musical household in Westfield, IL, where he could see his grandparents’ house from his front porch and sang in the church choir with his father. He enrolled at Indiana Central College in fall 1941, but put his studies on hold and enlisted in the United States Navy in 1942. He received the rank of Lieutenant (junior grade) and served in the South Pacific from 1942 to 1946, as first mate and later captain of the submarine chaser SC-1040. After the war, John returned to Indiana Central College where he received a B.A. in 1947 and then worked as the Director of Public Relations from 1947-1949. While at Indiana Central he met his future wife, Margaret Louise (Hanson) Rider of Hammond, IN. They were married on August 15, 1948. John was a middle school music teacher in East Chicago and Hammond (Indiana) from 1950-56 and received a Master’s in Musical Education from Chicago Musical College in 1954. During the summers, he worked as a milkman and an insurance salesman, although he didn’t make much money in insurance since he had the habit of helping his clients pay their premiums if they could not afford to do so. Between 1956 and 1961, he worked as a professor and administrator at MacMurray College in Jacksonville, IL. He spent two years during this time (1958-59, 1961-62) in East Lansing, MI working on his Ph.D. in Speech, which he received from Michigan State University in 1962. His thesis was a study of “The Television Audience of the Kennedy-Nixon Debates.” He then served as a professor of Mass Communications at the University of Texas at Austin (1962-63), Syracuse (New York) University (1963-68), and Southern Illinois University, Edwardsville (1968-93), where he founded the department of Mass Communications and served as its first chair. He also served as the founder and first director of Webster University in Geneva, Switzerland (1978-80), a city for which he developed a deep affection. John received a Fulbright grant to teach at the College of Micronesia in the Federated States of Micronesia (1987-88), and was a visiting professor at the University of Guam (1989-90). During their 57 years of married life, Louise and John lived in Hammond, IN; Jacksonville, IL; East Lansing, MI; Austin, TX; Syracuse, NY; Edwardsville, IL; Geneva, Switzerland; Jönköping, Sweden; Pohnpei, Federated States of Micronesia; Guam; and Leiden, Holland. They traveled widely in Europe, Africa, Asia, the South Pacific, and the Middle East, visiting over 70 countries. During retirement, they divided their time between Charlestown, NH and San Diego, CA. After Louise’s death in 2005, John stayed on in San Diego until he moved back to Illinois in 2015 to be near his sister, Evelyn Bailey, of Jonesboro. John published five books. Two of them were academic books: The Student Journalist and Broadcasting (1968) and Your Future in Broadcasting (1974; revised edition, 1978). One, Further Remarks (2004), was about his experiences in the South Pacific in World War II. Another, Sabbatical (2007), was about his experiences living and traveling over the years in Europe, Africa, Asia and the South Pacific, and the last, The Adventures of Acorn and Pinecone (2010), was a collection of the stories about a pair of woody friends he had told over many years to his children, grandchildren, nephews, nieces, grandnephews and grandnieces. John’s older sister, Henrietta Showalter, passed away in 1984. He is survived by his younger sister, Evelyn Bailey, of Jonesboro, IL; his daughter, Carol Louise Rider, of San Diego, CA; his son and daughter-in-law, John Jeffrey (Jeff) Rider and JoAnn Faye (Bernhardt) Rider, of Higganum, CT; two grandchildren, John Elias Rider, of Paris, France, and Mary Margaret Rider, of Washington, DC; and by a great number of affectionate nephews and nieces, grandnephews and grandnieces. John loved and admired Louise deeply. He also loved popcorn, music and, especially, to sing. He was eternally enthusiastic and creative, perpetually seeking out new adventures and imagining new projects. Profoundly sensitive to the people around him, he was unfailingly considerate and grateful. Cremation rites have been accorded. A Celebration of his Life will be held in Westfield, IL, when it is safe to gather. Memorial donations in his honor may be made to Residential Hospice/Music Therapy Program, 4215 Illinois Route 159, Glen Carbon, IL 62034, Musiciansoncall.org, or the choice of the donor. Crain Pleasant Grove-Murdale Funeral Home is in charge of arrangements.

John Russell Rider passed away peacefully on February 17, 2021 at the age of 97 at Manor Court in Carbondale, IL, where he had lived since 2015. John, also known as Papa, was born in Westfield, IL on April 19, 1923. He was the son of Frederick... View Obituary & Service Information

The family of Dr. John R. Rider created this Life Tributes page to make it easy to share your memories.

Send flowers to the Rider family.