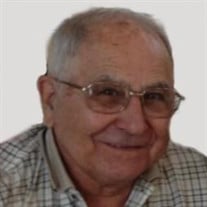 Johnny Frank Gamby, 89, passed away at 10:15am on May 16, 2021 in his home at Liberty Village in Carbondale, Illinois. He was born on March 4, 1932 in Zeigler, Illinois to John and Julia (Tsopak) Gamby. Johnny was in the Navy during the Korean War and was stationed on the naval base in Guam. He was a member of the Masonic Lodge of Freemasons. One of the highlights of Johnny’s life was his close group of golfing buddies. He was known to hit several hole in ones in his golfing career and often came away from the course with more golf balls than he brought. His eyes were sharp until the end. Johnny was well known in the Carbondale community from his many years as a United States Postal Carrier. He carried mail for 32 years in Carbondale. Johnny was a people person. He had a ready smile and loved to banter with others. He always took care of people, finding those who needed someone to speak up for them or help with difficult situations. His faithfulness to his wife Lucille, as she succumbed to dementia was evident. He spent his days with her, holding her hand at the care facility for many years. They were married on April 10th, 1951. They both survived their son, Michael Ray Gamby, who was stillborn in 1955. Johnny was preceded in death by his wife, Mary Lucille Gamby and by his parents and five of his siblings, Julia Parker, Anna Calcaterra, Mary Singer, Steve Gamby and Elizabeth Gamby. He is survived by his brother, Pete Gamby of Christopher; nieces, Jeri (James) Mudd of Troy, Mo.; Jill (James) Quisenberry of Urbana, IL and Karen (Lindsay) Nelson, of Summerville, SC, nephews, Randy (Lorelei) Gamby of Wilton, New York; Mark (Joyce) Gamby of St. Peters, Missouri and Marshall (Melody) Sheffer of Marion, IL; and a host of friends. Funeral Services for Johnny Gamby will be Saturday, June 5, 2021 at 11:00 am in Crain Pleasant Grove-Murdale Funeral Home with Rev. John Annable officiating. Visitation will be from 10:00 until the hour of service. Interment will follow in the American Legion Cemetery, Dongola. Military honors will be accorded.

Johnny Frank Gamby, 89, passed away at 10:15am on May 16, 2021 in his home at Liberty Village in Carbondale, Illinois. He was born on March 4, 1932 in Zeigler, Illinois to John and Julia (Tsopak) Gamby. Johnny was in the Navy during the... View Obituary & Service Information

The family of Johnny Frank Gamby created this Life Tributes page to make it easy to share your memories.

Send flowers to the Gamby family.