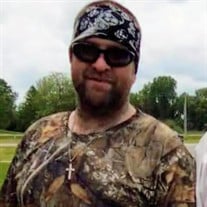 Jonathan Wayne Reynolds, age 39, of West Frankfort, formerly of Mound City, passed away on Saturday, August 21, 2021 at 1:47 p.m. Jon was born on March 10, 1982 in Cairo, a son of James Reynolds and Sharon Rodgers. He married Ashley Miner on April 15, 2005 and she survives. Jon had worked as a truck driver until his health no longer allowed him to. He was formerly a member of Villa Ridge Christian Community Church and enjoyed riding four wheelers and his motorcycle, but mostly, Jon was a family man and loved spending time with them. Survivors include his wife, Ashley Reynolds; five children, Jonathan (Amanda) Reynolds, Jr., Bryan Reynolds, Kevin Reynolds, Nicholas Reynolds and Arika Reynolds; his mother, Sharon Eaves; grandma, Wanda Powell; one grandchild, Lydia Reynolds with one on the way; a bonus grandchild, Aaliyah Rodgers; his bonus children, Randi Rodgers, Amber Rodgers, Joseph Minor, Wanda Rodgers, Eric Rodgers, Navia Stallings, Jordan Pyron, Jr.; two sisters, Lisa (Earl) Eaves and Jennifer Reynolds; one brother, Jack Wilson; his bonus brother, Travis Kraus; and numerous other relatives and friends. He was preceded in death by his father. Funeral services will be held at Crain Funeral Home in Anna on Friday, September 3, 2021 at 6:00 p.m. Cremation will be accorded following the services. A time of visitation will be held from 4:00 to 6:00 PM at the funeral home. In lieu of flowers, the family requests that memorial donations be made to Crain Funeral Home. Crain Funeral Home in Anna is in charge of the arrangements.

The family of Jonathan Wayne Reynolds created this Life Tributes page to make it easy to share your memories.

Send flowers to the Reynolds family.