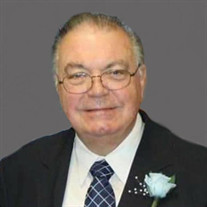 Joseph “Pastor Joe” Aaron Aldridge, age 76 of Jonesboro entered into the gates of Heaven, serenaded by Angels on December 22, 2020. He is finally home and resting in the Lord’s arms, free from cancer and effects from a stroke. We can only imagine how he felt when his eyes met the eyes of the Lord! He was born on February 17, 1944 to Aaron and Mary (Mattingly) Aldridge in Bardstown, KY. He was the oldest of seven children, born to this union. He married Sheila Keen on August 24, 1963 in Seatonville, IL. From that union they were blessed with four children, Tim, Angela, Londa and Bridget. Together they shared 57 years creating many life memories. He graduated from Hall High School in 1963 in Spring Valley. He accepted the Lord Jesus Christ in at the age of 10. He surrendered to preach at the age of 18. He attended the Clark Memorial in Mississippi and Moody Bible College. Pastor Joe was ordained as a Southern Baptist Minister. He ministered in Arkansas, Texas and Illinois. In February of 2010 he retired from the First Baptist Church of Jonesboro, after suffering a stroke. He loved to sing and had a recording from Nashville, TN. His greatest joy and desire was serving the Lord. He was honored to have lead each of his children to the Lord and baptized his wife and each of his children and several of his grandchildren. Through all of his afflictions, he remained strong and faithful to the Lord. “If one person comes to know the Lord through my afflictions and death, then it was all for the good” - those were Pastor Joe’s word. Pastor Joe is survived by his wife, Sheila of Jonesboro; a son, Tim (Linda) Aldridge of Mattoon; daughters, Angela (Larry) Cyphers of Makanda; Londa (Kevin) Peterson of Anna and Bridget (Tim) Flick of Cobden; 5 grandsons, Tony Aldridge; Justin Aldridge; Joseph Aldridge; Angel Aldridge and James Peterson; 2 granddaughters, Brianna and Katelyn Flick; great-grandchildren, Brooklynn, Athena, Angel, Jr. and Serenity, Rayya and Alannah; his mother, Mary Stevens of Rock Falls, IL; 2 brothers, Richard and David Aldridge; 3 sisters, Joyce Anderson, Ruth Musselman, and Rose Cooper; aunts; uncles; nieces; nephews; his dog, Midnight and a host of friends from all over the United States and other countries. He was preceded in death by his father, Aaron Aldridge; his stepfather, Garnett Stevens; a granddaughter, Alicia Aldridge and a grandson, Steven Ledesma; brother, Charles Aldridge; father and mother –in-law, Rudy and Helen Pacetti. Funeral Services for Pastor Joe will be Sunday, December 27, 2020 at 1:00pm at the First Baptist Church of Jonesboro with Pastor Ray Highfield, Pastor Brian Trambley, Rev. Lester Aldridge and Pastor Perry Williams officiating. Interment will follow at the Ebenezer Hall Cemetery near Lick Creek. Both the funeral service and the cemetery committal will be live on the Crain Funeral Home Facebook page. Pass through will be from 4:00 pm until 7:00 pm on Saturday, December 26, 2020 at the church. Social distancing and masks required. WELL DONE GOOD AND FAITHFUL SERVANT…..MATTHEW 25:21 Crain Funeral Home in Anna-Jonesboro is in charge of arrangements.

Joseph &#8220;Pastor Joe&#8221; Aaron Aldridge, age 76 of Jonesboro entered into the gates of Heaven, serenaded by Angels on December 22, 2020. He is finally home and resting in the Lord&#8217;s arms, free from cancer and effects from a stroke.... View Obituary & Service Information

The family of Joseph "Pastor Joe" Aaron Aldridge created this Life Tributes page to make it easy to share your memories.

Send flowers to the Aldridge family.